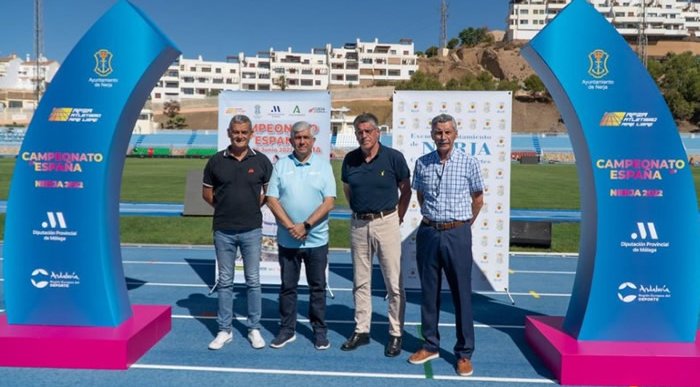 As announced by Nerja Town Hall this Thursday, June 23, the 102nd edition of the Spanish Absolute Athletics Championship will start today, Friday, June 24. This national event will be held in the Malaga municipality at the Ciudad Deportiva Stadium until next Sunday, June 26.

Nerja becomes the fifth Andalucian municipality to host this national competition. Jose Alberto Armijo, The mayor of Nerja,  accompanied by Enrique Lopez Cuenca, the vice president of the Royal Spanish Athletics Federation, and Luis Saladie, the director of competitions of the RFEA, visited the municipal sports facilities on Thursday morning.

Mr Armijo conveyed his gratitude to the RFEA for trusting Nerja and its Council to host the most important championship in Spain, which is held there for two reasons. “Because athletics in Nerja, through its Club, is a national benchmark, and above all, because we have top-level municipal sports facilities”, he pointed out.

The mayor added: “I want to highlight the work carried out by the municipal technicians and workers, under the direction of Javier Martin Losada, as the municipal organiser of the championship, so that this Sports City projects a magnificent image today”.

Enrique Lopez Cuenca reported that this edition will bring together 782 athletes from 125 clubs, “with a clear objective, the Eugene World Championship to be held in July, and the Munich European Championship in August”.

“We are going to have a fantastic cast of the best national athletes, and we are going to enjoy an event of the highest level”, he enthused.

Luis Saladie thanked Nerja Town Hall for all the effort that the municipality has made to host this Championship, as well as the Nerja Athletics Club for the great work carried out. He also valued the work that everyone has done in Nerja, without forgetting the volunteers: “they are essential for this to work”.