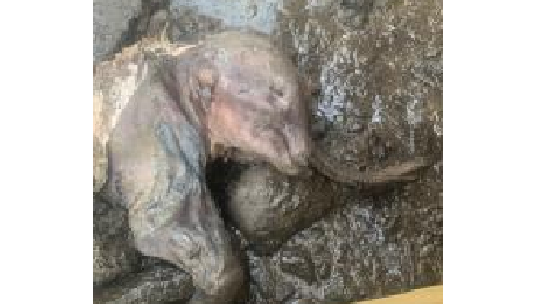 A  mummified baby woolly mammoth that is near-perfect and complete has been found in the Klondike gold fields in the Yukon by a miner.

The remains were uncovered in the Trʼondëk Hwëchʼin Traditional Territory of Yukon in the US according to a press release issued by the state government on June 24.

The Yukon is famed for the fossils that have been found in the region but rarely are fully formed mummified animals including skin and hair found. That makes Nun cho ga the most complete mummified mammoth found in North America.

Recovery of the animal was made possible by collaboration between the Government of Yukon and Brian McCaughan of Treadstone Mining, who are working together to respectfully preserve and learn more about Nun cho ga and to share these stories and information with the community of Dawson City, residents of the Yukon and the global scientific community.

The Minister of Tourism and Culture Ranj Pillai said: “This is a remarkable recovery for our First Nation, and we look forward to collaborating with the Yukon government on the next steps in the process for moving forward with these remains in a way that honours our traditions, culture, and laws. We are thankful for the Elders who have been guiding us so far and the name they provided. We are committed to respectfully handling Nun cho ga as she has chosen now to reveal herself to all of us.”

Palaeontologists working in the Yukon say that it is an amazing find and they are looking forward to finding out more.

A quick examination of the woolly mammoth suggests that she is female and roughly the same size as the 42,000-year-old infant mummy woolly mammoth “Lyuba” discovered in Siberia in 2007.

Geologists think that Nun cho ga died and was frozen in permafrost during the ice age, over 30,000 years ago.

Scientists worldwide will be clamouring to get access to the mummified baby woolly mammoth , with such perfectly formed specimens rarely found.