A group of Mojacar (Almeria) friends discover the greatest thing ever 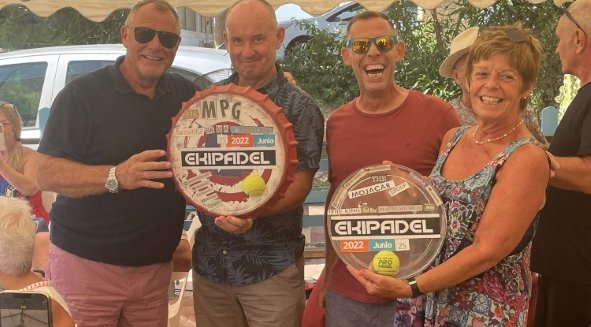 AROUND five years ago, a group of friends in Mojacar discovered that padel-tennis was the greatest thing ever.

“In those days we struggled to get a regular group of four people together,” Tony White told the Euro Weekly News.

“But then, talking among friends, we realised that other little groups of friends had the same problem, so in October 2018 I started a WhatsApp group, putting people in touch with each other,” Tony said.

That was the start of the Mojacar Padel Group who meet on Monday, Wednesday and Friday mornings all year round.
“We have also started a Tuesday morning beginners and improvers group, coached by our trainer and all-round good guy Gustavo,” Tony said.

The group has around 40 members from the Netherlands, Germany, Belgium, Eire, Spain and – of course – the UK.

“Some are only summer visitors but are friends nevertheless,” Tony continued. “Ages vary from early 40s to early 80s although the majority are 58 to 65-ish.”

When the rain was bad earlier this year,the group still had some fun away-days playing, indoors in Cuevas del Almanzora, hosted by a new friend, Ramon.

Post-Covid, they held their first get-together at Christmas 2021 while some restrictions were still in place but on June 25 they enjoyed what Tony called “a full blast.”

This began with a mini in-house tournament, which was competitive but left everyone smiling, and was followed by an alfresco barbecue, quiz and karaoke that had the girls travelling back to the 1980s, dancing round their handbags, acording to Tony.

“I gladly admin the group but it belongs to the people who use it and we have been mostly lucky in that department,” he said.