Women’s walking football: Our own “Lionesses” roar in praise 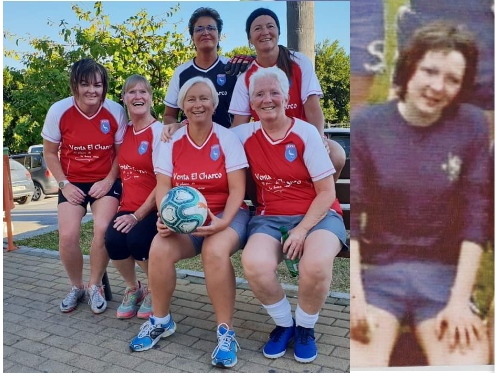 Photo: Sheila now and in the 1970s bottom right, and Gemma far left

Women’s walking football is seen as a way women can play sport in middle to later age. Two women who have played football at the very highest level reflect on a monumental month for women’s football after The Lionesses win.

Sheila Bella Clifford who plays for Aston Viñuela said, “we had no support at all when I joined the recently formed Chelsea in 1972. All we had was the name, no financial help and no meaningful acknowledgment. We played over Hackney marshes, put up our own nets, had cold showers, and warmed up with a cup of bovril.

We paid all our own expenses, but we loved it.” She continued, “I followed the Euros and really enjoyed it, I’m so happy that women’s footie is taking off, I wish I had that opportunity but I was born 45 years too soon. I’m excited about the future, good luck to them”.

Sheila is full of praise for the current players and would like to see all the players that paved the way given the recognition they deserve.

Gemma Gribbon was born in Belfast and represented Northern Ireland. Her path into women’s football was fraught with both religious and misogynistic issues. She explained, “the medals from my international football career are 28 years old, tarnished, full of dust, no caps and no real recognition. This is all we were given for representing our country, along with a mens kit that was 3 times too big (that we had to give back), an old bus (that broke down on the way to Dublin) .and… we had to fund our own food!

As a pupil at a convent school, I remember a meeting with the principal to gain permission for a girls football team, she declined. How times have thankfully changed. The time is right for women’s football to be given the credit it deserves”

If you would like to get involved in women’s walking football, please send a message via walkingfooty.com on Facebook.