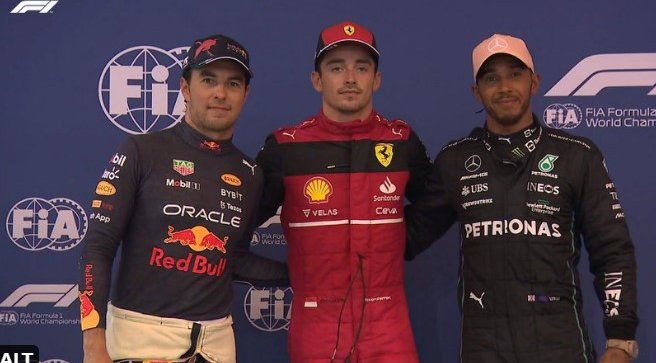 Image of the three top qualifiers in the Singapore GP. Credit: [email protected]

Charles Leclerc will start from pole position in the Singapore Grand Prix tomorrow, Sunday, October 2. He drove his Ferrari to a stunning fastest lap around the Marina Bay street circuit this evening, Saturday 1. It is his second consecutive pole and the ninth of the season.

“It was really, really special. Every qualifying in street tracks is super on the limit and even more like that when it is damp. But it worked well”, said the Frenchman after the session.

Red Bull’s reigning world champion Max Verstappen looked to be heading for that front-row spot, but a disaster over his car’s fuel supply resulted in the Dutchman finishing in eighth place. On the penultimate lap of today’s Q3 session, he received a message via the team radio instructing him to pit urgently. “I don’t get it. What are you saying?”, Verstappen was heard saying.

He was on-course for an unbelievable lap 😱

Max was unable to fight for pole in Singapore, after being called into the pits to ensure he had enough fuel for a sample after qualifying#SingaporeGP #F1 pic.twitter.com/lUdIsiu5HJ

FIA rules state that cars must have a specific amount of fuel remaining after completing the session in order to provide a sample. The cars run with as little fuel as possible allowing them to carry less weight to achieve faster lap times. Verstappen claimed he was unaware of his fuel situation and thought he could steal pole in that final qualifying lap.

“Not enough fuel in the car”, commented Verstappen after the session. “We got a little surprised we had that extra lap but you can track that, you see that coming. That’s why I don’t really understand how that was missed. In hindsight, I should have finished the lap before when they told me to abort to make a gap for the last lap”.

“All this was triggered by Pierre (Gasly) in front of me, which is why I had to create a gap for that final lap, because I was getting close to him. But that’s not an excuse. I cannot see how much fuel is in the car and we have all the sensors in the world to track these things. So, yeah, incredibly frustrating”, he concluded.

A frustrating day for the championship leader 😞#SingaporeGP #F1 pic.twitter.com/yG4FNQ2zfo

The fact that he starts from eighth position on the grid would seem irrelevant when you consider his recent results when starting from lower down the pack. Singapore’s street circuit though is a very different proposition. “It’s a bit like Monaco – you cannot really pass. I don’t really see a podium or a win”, he emphasised.

Should Verstappen win tomorrow’s race, and other results go in his favour, then he will be crowned world champion for the second consecutive year.

Sergio Perez placed the other Red Bull second on the grid alongside LeClerc, pipping Lewis Hamilton’s Mercedes by just by 0.022 seconds. Carlos Sainz guided the other Ferraro to fourth, with Fernando Alonso’s Alpine in fifth, as reported by bbc.com.