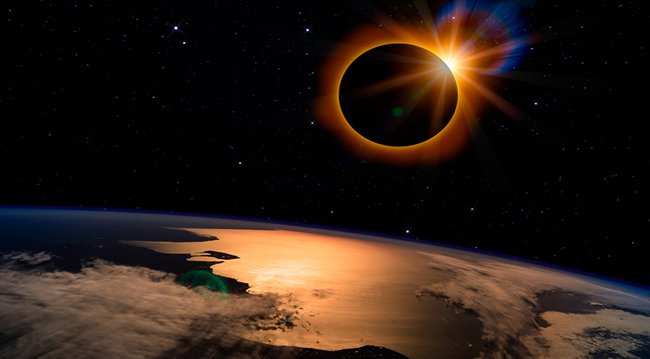 A partial solar eclipse will be visible in parts of Spain on Tuesday, October 25.

Next Tuesday, October 25, there will be a solar eclipse that will be seen in a large part of Europe, northeast Africa and western Asia. In Spain, it will be partial and visible in the northeast of the country.

According to data from the National Astronomical Observatory (OAN) website, this latest solar eclipse will begin in the Atlantic Ocean, near the coast of Iceland, and will end in the Indian Ocean. In total, it will last 244 minutes and its maximum will be north of Nizhnevartovsk, in Russia, where 86 per cent of the solar disc will be hidden.

In Spain, being partial, the Moon will cover 12 per cent of the solar diameter in Gerona, 10 per cent in Barcelona, and below that figure in the rest of Catalonia, Aragon, Navarra, the Basque Country, La Rioja, Cantabria, Asturias, north of Castilla y Leon, the north of the Valencian Community, and the Balearic Islands.

June 10, 2021, was when the last partial solar eclipse occurred in Spain. A partial eclipse is a phenomenon that can be seen with some frequency. Witnessing a total or annular eclipse is much more difficult.

In fact, the last visible annular eclipse took place in 2005; the last total eclipse was in 1959, and was only seen from the Canary Islands. The Iberian Peninsula has not seen a total solar eclipse since 1912.

Between 2026 and 2028, according to OAN, there will be two total eclipses and one annular one that will be visible from some point in the country.

The next solar eclipse visible as a total in Spain will take place on August 12, 2026, followed by another on August 2 of the following year, and shortly after, on January 26, 2028, as reported by malagahoy.es.

As detailed by OAN, to observe these phenomena, you should never look directly at the Sun or use sunglasses or home remedies such as X-rays, blurred films or devices (cameras, videos) and instruments (telescopes, binoculars) that are not equipped with solar filters.