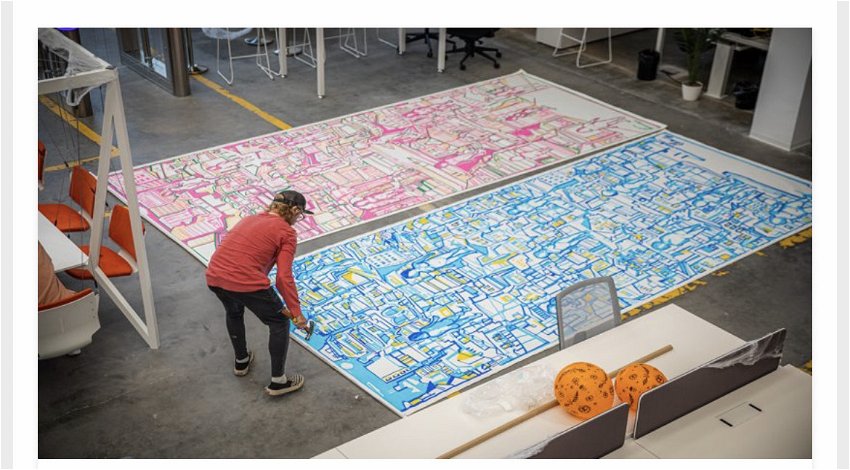 Watch an American expat transform Madrid into art as big as a HOUSE. Credit: Travis Moore/@travis4sale.

AN American artist living in Madrid has taken more than a little inspiration from his surroundings – his latest exhibition showcasing the city features artwork almost as big as a house.

Texan Travis Moore, known as @travis4sale, has created epic scenes of Spain’s capital for his Madrid Inspires: Seven Themes exhibition – one of which stands at an impressive 16.4042ft (five metres) tall.

He began creating his impressions of the city using his distinctive style, which feature a complexity of interconnected lines, after moving to Spain in 2021.

He told Euro Weekly News: “The big art took around 10 hours or so each. I had to do it all in my apartment so I rolled out half the image, 2.5 meters by two meters, and then taped it off.

“When it was dry I rolled it up and worked on the second half of a photo so I could check the composition and I did the same on the second piece.

“I went through two Posca pens of each color on each piece, so it was very efficient really.

“And then it all had to be transported to the space and hung with ropes and that was a bit of a struggle but they are still hanging.”

His work will be displayed from tomorrow, November 3, where more than 30 original pieces of artwork will be on display, ranging in size from the small framed A4 paper pieces to the large unstretched canvases totaling over 30 m2.

In addition, more than 140 pieces of art will be available to buy – including the huge ones, which are priced at €3,000 each. The majority of his smaller pieces range from around €100 or less.

Travis uses the markers, including Sharpies and Posca, on a multitude of surfaces, including canvas, paper, glass, and all sorts of found objects.

But he doesn’t limit himself to the popular marker pens – back in the US, Travis received worldwide media attention as the artist responsible for immortalising Motörhead singer Lemmy Kilmister into a memorial statue.

The life-size bronze is located at the Rainbow Bar & Grill on the Sunset Strip in Los Angeles, California.