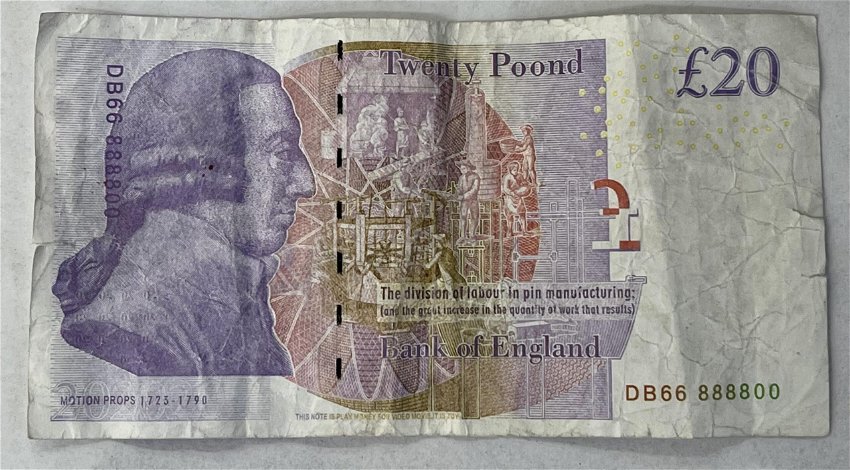 A CONMAN from Newcastle was rumbled after being caught with counterfeit notes that said ‘Twenty POOND’ instead of ‘Twenty pounds’.

Geordie William Hickson had £820 (€940) in fake notes that gave him away due to the rather apt typo.

They appeared genuine at first glance – they also had images of economist Adam Smith and pin factory workers featured on the reverse side.

But at a closer look, pictures of the money show the wording of ‘twenty pounds’ has been substituted with the geordie slang ‘twenty poond’, reports the Daily Mail.

Hickson’s 41 fake notes were found in his sock when he was searched at Forth Banks Police station in Newcastle following an unrelated arrest 18 months ago.

A court heard that Hickson planned to spend the money, which was examined by an expert at the Bank of England and confirmed to be fake.

Prosecutor Andrew Finlay told Newcastle Crown Court that police noticed that the notes were not genuine.

“The notes were examined by an expert from the Bank of England, who confirmed they were not real.”

Hickson’s defence lawyer Rachel Hedworth said the defendant had suffered “significant adversity” in his life and, at first, didn’t realise the notes were fake.

She said: “He has accepted he was in simple possession of them and accepted he would have gone on to use them, had he had the opportunity.”

She added: “After a period of time he did realise that they were [fake].”

The court also heard that Hickson is not heavily convicted and has a history of mental health problems.

Mr Recorder Jason Pitter KC told Hickson: “You were arrested and in your possession was £820 cash. All of that money was counterfeit. There were 41 notes in total.

“That is a very serious offence, which for obvious reasons crosses the custody threshold.

“The existence of counterfeit money undermines the economic system.”

Hikson was sentenced to 23 months imprisonment, suspended for 18 months, with rehabilitation requirements and a year-long curfew between 8pm and 6am.