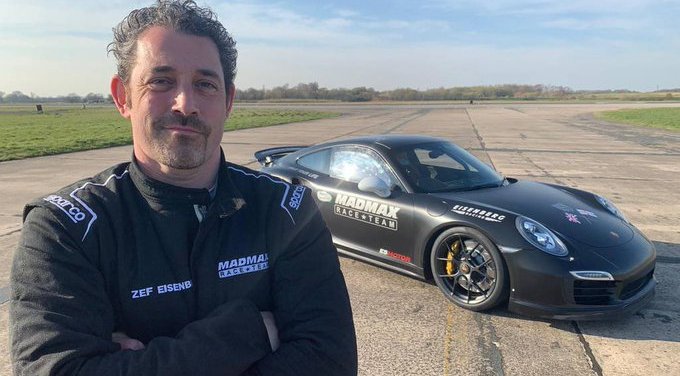 A millionaire, the founder of Maximuscle,  with a zest for speed was killed trying to prove to the world that he had created the fastest Porsche motorcar.

A coroner in York (England) recorded a conclusion of misadventure on Friday, December 9 saying that Zef Eisenberg, 47, had died after taking his one hand off the steering wheel to deploy the car’s parachute.

Attempting to record the highest speed over a mile, Eisnerberg took his one hand off the wheel resulting in him losing control of the car. According to those who saw the accident, the car took off “barrelling, rolling and spinning” before coming to a stop some 500 yards down the road.

According to the coroner Eisenberg deployed the parachute incorrectly applying the brake before deploying the parachute. He was traveling at 244 mph at the time.

Steve Gardner, a collision investigator for North Yorkshire police said the movement involved in deploying the parachute was substantial and affected control of the car. Ordinarily buttons are installed for this purpose, however, this car was fitted with a lever that had to be pushed forwards.

That movement to release the lever resulted in a noticeable twitch in the steering wheel that resulted in the loss of control. An analysis of the vehicle showed not faults or issues.

A spokesperson for Motorsport UK, Jamie Champkin, said that Eisenberg could not have survived given the forces involved in the crash. He said: “The car became airborne very quickly, it travelled 513 metres before coming to a rest.

“The minute it is in the air, there’s no friction, apart from air friction, to restrain its speed in any way.

“We know it has barrel-rolled but it has also tumbled.

“There came a point in that tumble that the car came down nose first.

“We don’t know precisely what speed it was doing at the time.

“Our estimates were it was probably still doing 150mph, maybe 250kmph, but it hit the ground and our very basic calculations would suggest an impact force may be as high as 37,000lbs, or 218 times Mr Eisenberg’s body weight.

“This incident was not survivable in that context.”

The crash is not the first with Eisenberg having survived a high speed motorcycle crash at the same venue that resulted in him having to learn to walk again.

We are saddened to learn of the death of fastest turbine-powered motorcycle record holder Zef Eisenberg.

Zef's love of speed and ambition to break records made him a legend and pioneer within a tight community of drivers. Our thoughts are with his family and friends at this time pic.twitter.com/YKvA4PsrcS

Eisenberg made his fortune as the owner of the Maximuscle fitness brand of protein powder, which he eventually sold to GlaxoSmithKline before moving to Guernsey.

As a result of the death of the Maximuscle founder who was killed trying to prove he’d created the fastest Porsche, Motorsport UK have announced some changes will be made to licensing requirements for future speed attempts.