Bee in my bonnet 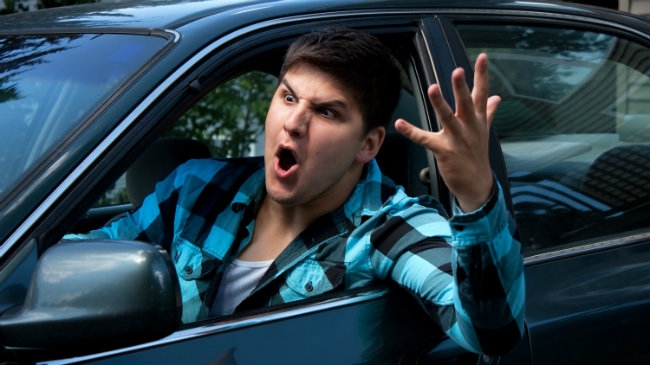 There are certain Spanish pastimes that should be undertaken only with extreme caution and after a long, soul-searching discussion with yourself, your nearest and dearest.  Running with the bulls in Pamplona is one; getting behind the wheel of a car another.
There is something about this joyfully relaxed and generally pacified lot that sends them into a tailspin when it comes to driving: Leisurely concepts of mañana are abandoned by their inner racing driver in a bid to arrive ayer – even if it is just to make it home in time for tapas.

In fact, there is no wonder there are so many drink drivers out there – you need a stiff one before embarking on these motorways from hell. The school drop-off is more akin to running the gauntlet: keep up or be unceremoniously shoved off the road by a lorry driver. Seasoned motorists admit that driving is more of a pursuit than a purpose, and you have to come to love these daily chases to survive.
Visiting friends and relatives grasp the passenger seat with white knuckles and gasps of horror, proclaiming they will never, ever drive in this country. But as a resident you don’t have much choice.
At times, the pace turns to standstill or snail as we sidle past yet another crash scene straight from the pages of Armageddon; stretchers and ambulances at the ready. It is practically a daily occurrence and just a matter of time…

Meanwhile, the Guardia Civil seem more interested in catching those hardened criminals who have momentarily forgotten to renew their tax or change license plates than stopping reckless drivers.
Amidst all the lose cannons on the roads, there’s the other type of driver that leaves me dumbfounded – the motorcyclist who insists on tearing around the streets at breakneck speed in nothing but bikinis, shorts and flip flops – the helmet really is cursory by then and it is hardly surprising that most fatal road accidents involve motorcyclists.

Enough of the rant and the rave and now for some constructive suggestions, since most of us are unable to avoid venturing onto the roads once more.
Firstly, wear protective clothing – the Michelin man has survived decades of motoring in his white, padded suit, which basically functions as an ever-ready airbag, though you may want to ensure that the air-conditioning in the car is working as the heat may otherwise consume you and convertibles are also a no-no for an inflatable figure.

Secondly, get a really intimidating looking car. Other drivers are unlikely to pick a fight with a Hell’s Angels vehicle with bared teeth – or make your run-around-town a tanker lorry: Tough to park but unlikely to cause you personal injury.
Or, thirdly, do as our Russian oligarch friends – mosey around by helicopter as the airways are slightly more regulated and a whole lot less crowded. A two-seater Robinson will set you back around €300,000, excluding pilot and mansion or yacht to land it on.
Still, it is reassuring to hear that consideration is currently given to increasing the speed limit to 130 kilometers per hour. That way we can all buzz to our destination and bee there before we know it.