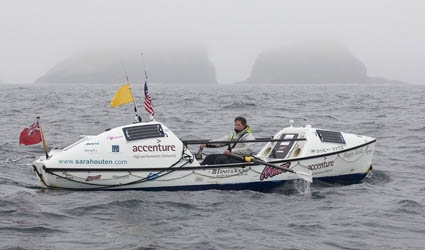 ANCHORAGE, Alaska (Reuters) – A British woman has completed a 150-day journey rowing solo from Japan to Alaska, local officials and an expedition spokeswoman said on Tuesday as the adventurer rested at one of the state’s remote Aleutian Islands.

Residents of Adak, an island community of about 320 people, have rolled out the welcome mat for Outen, who is working on a multi-year mission to travel around the world using her own body’s power.

About half the residents of Adak came out to greet Outen when she reached the shore, said Smiloff, who is the community’s former harbourmaster. “It was pouring down rain. But we were happy to see her,” Smiloff said.

Outen is seeking to encircle the globe by bicycle, kayak and rowboat. She launched the 20,000-mile (32,190-kilometer) effort, called “London2London,” on April 1, 2011, according to her Website. That year, she travelled 11,000 miles (17,700 kilometers) by kayak and bicycle across Europe and Asia to Japan, the site says.

The expedition hit a snag in 2012, when her effort to cross the North Pacific was halted by a severe storm that forced her to return to London for nine months of training and regrouping.

In her latest journey, Outen arrived on U.S. soil in Adak just as weather conditions in the area were deteriorating, Smiloff said. “It’s going to get worse in the evening, and that’s why it’s so nice to have her in,” Smiloff said.

Outen traversed over 2,000 miles (3,220 kilometers) from Japan to Adak Island, according to her Website. She stopped within a half-mile (eight-tenths of a kilometre) of land and had to be towed the rest of the way to the island because of winds and current pushing her toward rocks, her Website’s blog section said.

Outen was not available for a telephone interview on Tuesday, because she was exhausted, Johnson said in an email.

Outen is using the expedition to raise money for four charities, according to her Website.

Outen was also the first woman and the youngest person to row solo across the Indian Ocean from Australia to Mauritius, accomplishing that feat i