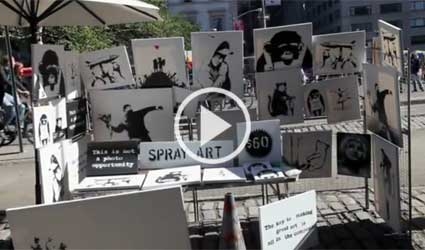 NEW YORK (Reuters) – Art collectors and tourists in New York got a bargain during the weekend when British graffiti artist Banksy, whose work is expected to fetch upwards of $150,000 (93,815 pounds) at an auction later this year, sold paintings at a pop-up stall in Central Park for $60.

“Yesterday I set up a stall in the park selling 100 percent authentic original signed Banksy canvases. For $60 each,” the elusive artist said in a posting on his website on Monday.

The stall, which is shown in a video on the website, was manned by a gray-haired man wearing a cap who was not Banksy. It featured works by the artist, including paintings of animals, a ballerina and an elephant with a rocket strapped to its body.

The video showed the first sale was to a women who bought two small works for her children but only after bargaining for a discount. A lady from New Zealand purchased two paintings and a buyer from Chicago who needed “something for the walls” of his new house purchased four works.

The video indicates the buyers had no idea they were buying Banksy originals.

“Total taking for the day …$420,” the website said, adding that the sale was a one-off event and would not be repeated.

Earlier this month Banksy, which is a pseudonym for the artist whose real identity is unknown, announced he would be exhibiting his work on walls throughout New York City.

Banksy gained fame in the 1990s in London and Bristol in western England with his stencilled works with provocative, ironic social commentary on buildings. He has become popular on the international auction circuit alongside Andy Warhol and Damien Hirst.

The cult artist also directed and appeared in the 2010 Oscar-nominated documentary “Exit Through the Gift Shop,” but kept his face and voice obscured.

A spray-painted mural by the artist called “Slave Labour,” which was taken from a wall in London, was pulled from an auction in Miami in February along with another work following questions about ownership. It later sold at a private auction for $1.1 million in London, according to media reports.

Another work called “Flower Girl,” which was found on the wall of a Los Angeles gas station in 2008, is expected to fetch between $150,000 and $300,000 when it is auctioned in Beverly Hills in December.