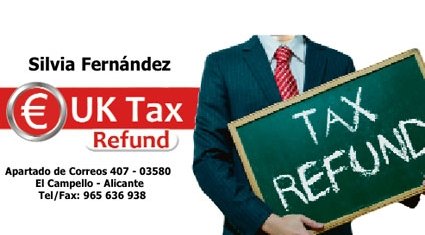 WITH the Budgets in Spain and the UK struggling, it should come as no surprise to anyone that the tax authorities of both countries have been told to collect as much tax as possible.

Perhaps, due to the circulation of incorrect information, you have been led to believe that you are able to choose where to pay your taxes either in Spain or the UK.

Well, this is not the case; matters regarding the payment of taxes are very well legislated. Depending on the type of income received by each individual it is established if payment of taxes is to be made in Spain or in the UK.  So, if you live in Spain and are registered as a resident figure on the Padron (municipal register) where you live and have a SIP Spanish national health system card, the Spanish tax man has started to ask the question: “Why then do you not pay your taxes in Spain?”

Many British residents in Spain have started to receive letters from the Spanish Tax Agency, asking them to regulate their tax situation.

In the UK, HMRC is focusing on rental income. It does not matter if the income arises from a property located in the UK or abroad.  The UK tax authorities are trying to put things in order and receive revenue from UK residents with undeclared overseas rental income or investments.

If you receive a letter from the Spanish or English tax authorities, do not panic. Professional help and advice on the most beneficial way to resolve the situation should be sought.

At the beginning of this year the Spanish tax authorities announced a new law that obligates Spanish residents to declare the assets they hold in other countries (properties, investments, insurances, etc). Lately other countries within the EU are also obligating their residents to do the same.

This obligation is legislated by the European Union Savings Directive and will be successively put into action by all EU countries.

Some people have started receiving questionnaires from the banks that hold their savings in other EU countries, asking for the same information that was requested in the 720 form (the Spanish equivalent).

It’s obvious that putting in order your fiscal situation both in the UK and in Spain is the only way to avoid fines, loss of income, etc.

UK Tax Refunds is a registered Agent with Her Majesty’s Revenue and Customs (HMRC) and fully  understands the UK Tax System.

The service that UK Tax Refunds provides not only recovers any overpaid tax, but as part of the process ensures that Spanish tax obligations are met and all clients’ UK tax affairs are in order.