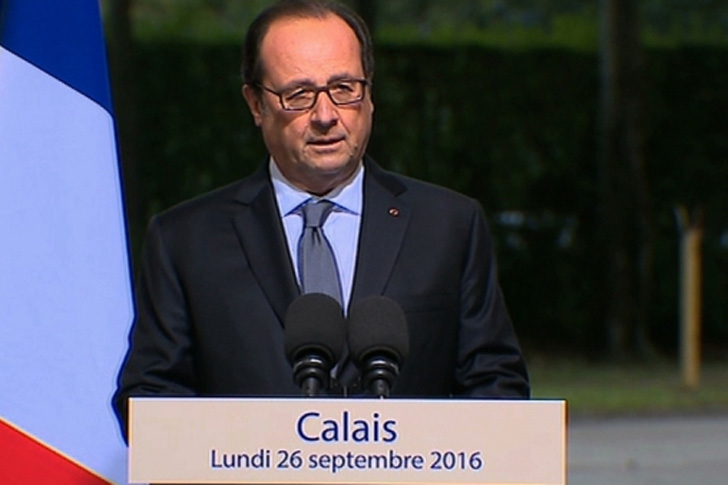 HAVING postponed his planned visit to Calais following the Nice terrorist attack and then the murder of a priest in Normandy, French president François Hollande finally visited the town on September 26 to see the situation for himself and to discuss plans of how best to deal with the refugee camp known as the ‘Jungle’ which contains some 10,000 people of which it is estimated 1,000 are unaccompanied minors.

The president made it clear that it was his intention to have the camp destroyed and those in it dispersed to ‘welcome centres’ around France at which time they could possibly apply for French citizenship or be assisted to return to their own country or the country in which they first arrived within the EU.

As part of his speech, Mr Hollande called on the British government to become involved in the closure and resettlement as a matter of not only honouring the 2003 Le Touquet agreement but also as a gesture of humanitarian aid especially as the majority of those in Calais were only there in order to try to reach the UK.

Taking the opportunity to obliquely criticise his potential rival at the next presidential elections, Nicolas Sarkozy, he made it clear that when the camp is dismantled, it will not be allowed to simply be rebuilt as new migrants arrive and he promised that the French authorities would not only police the area but would crack down on any suspicion of people smuggling in the area.

Mr Sarkozy will be campaigning on a much harder line, calling for Britain to set up a camp or camps within the UK in which asylum seekers would be kept and processed, although he would agree to any who were not accepted to be returned to France and thence from where they came, if elected president.

In response, the Home Office made it clear that the problem of dismantling the camp and dispersing the inhabitants was a matter for France alone and that Britain would not get involved as was apparently made clear when Home Secretary Amber Rudd visited Paris earlier this month.

As far as the unaccompanied minors are concerned, the British position is that it will assist in resettling children in the UK if they have demonstrable links with the UK and in principle, it will ‘support’ the French government in its work to provide alternative accommodation for those being ejected from Calais.