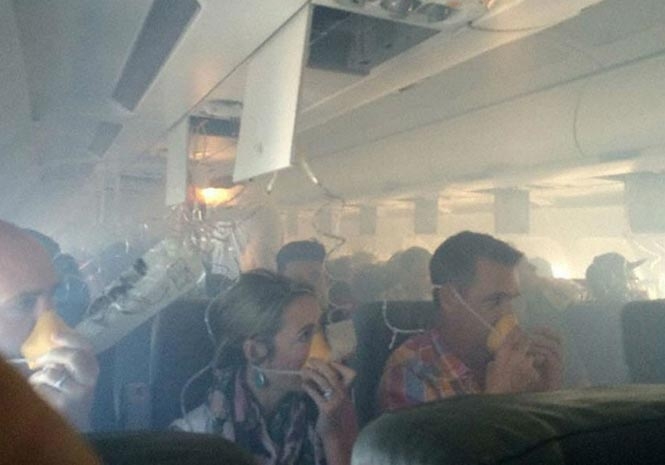 Fume event in an aircraft cabin

The Aerotoxic Association is today calling for all evidence regarding Aerotoxic Syndrome to be formally submitted towards a call for an Independent Public Inquiry at the International Criminal Court in The Hague, on whether known solutions should be introduced on aircraft for the safety of all those who fly.

Having had contact with around 2,500 potential victims of toxic air poisoning on aircraft in the last 10 years, both aircrew and passengers from around the world, the Aerotoxic Association demands that all evidence, both for and against the effects of toxic air on aircraft, be submitted to allow an Independent Public Enquiry to assess and make recommendations for actions.

John Hoyte, founder of the Aerotoxic Association, stated, “The problem of passengers and aircrew being exposed to toxic air has been known about since the 1950’s, and there has been mounting evidence to support the causal link between exposure on aircraft and both acute and chronic ill health. Despite this, the industry, the UK Government and regulatory bodies have yet to take any action to prevent this and to protect the public.”

All evidence should be submitted to the Aerotoxic Association at [email protected], including full contact details and marked for the attention of “The International Criminal Court, The Hague, The Netherands”.

Since Aerotoxic Syndrome was first named in scientific research in 1999 there has been mounting research evidence of the link between toxic cabin air and ill health, culminating in a study published by the World Health Organisation (WHO) in 2017 which established a causal link. Other evidence has included:

·         In April 2008, BBC Panorama broadcast “Something in the air”, billed as showing “how air passengers could be exposed to toxic fumes in the cabin while flying”.

It is nearly 5 years since the UK’s Committee on Toxicity (COT) last considered this issue, identifying several areas requiring further investigation. The Aerotoxic Association believes enough time has lapsed, and more than enough people are suffering, for the International Criminal Court to take this on and determine what action, under the precautionary principle, is in the best interests of public safety.

John Hoyte continued, “At last we are beginning to see some action to tackle this in France and the USA, with two airlines now looking to protect their passengers and crew with air filters reminiscent of the tobacco industry filtering cigarettes in the 1950’s. EasyJet have changed engine oil to a safer formulation and will fit ‘bleed air’ filters and nerve agent detectors to all of their aircraft, because of an ongoing French criminal court case. In addition, the modern Boeing 787 Dreamliner uses separate air intakes, rather than ‘bleed air’ from the engines, which completely avoids the poisoning. Yet despite decades of evidence and scientific research, air passengers are still put at risk every day from this preventable danger.”

–       Launches an international call for all evidence, both positive and negative, concerning acute and chronic ill health experienced by the public following toxic oil fume exposure in commercial jets. Evidence to be directed to the International Criminal Court at The Hague, The Netherlands.

–       Demands an Independent Public Inquiry in to whether the known technical solutions should be introduced in bleed air jet airliners on the precautionary principle and in the public interest.

John Hoyte concluded, “In most areas of life we work on the precautionary principle to protect health and wellbeing, yet despite the huge amount of scientific evidence to show the effects of this preventable issue, the industry, UK Government and regulators have buried their heads in the sand. It is time for an Independent Public Inquiry to finally resolve this and to determine the necessary actions to protect the public.”

The Aerotoxic Association was set up in 2007 to raise this issue of toxic air exposure in aircraft and to support those suffering from aerotoxic syndrome.

Aerotoxic Syndrome is the term given to the illness caused by exposure to contaminated air in jet aircraft and was first introduced in a published paper in 1999. The cause has been shown to be the contaminated and unfiltered bleed air used in the aircraft cabin. In an aircraft, a supply of pressurised air is required at high altitude and this is supplied direct from the compressor section of the jet engine, and is known as ‘bleed air‘. Unfiltered bleed air is mixed inside the aircraft with recirculated cabin air. The bleed air which originates from the jet engines is unfiltered. This can lead to toxic substances entering the cabin due to a known fundamental design flaw.