Are British police giving up on crime? 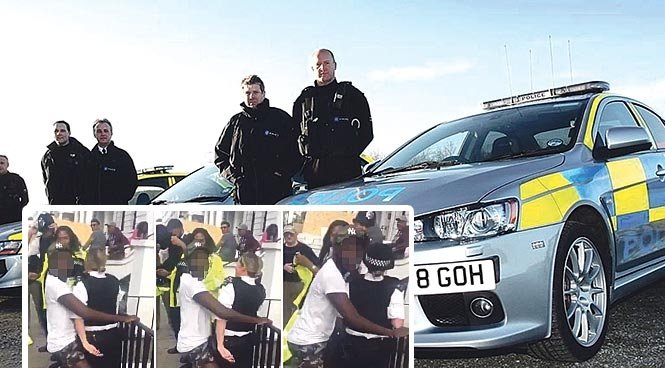 COP OUT: The BBC’s Traffic Cops and (inset) a reveller grinds on a police officer during the Notting Hill Carnival.

WHAT on earth is going on with the British police force?

They continually gripe about being undermanned and ill equipped. They moan about being so weighed down with work they have been forced to downgrade ‘risk assessment’ of crimes to a ridiculous level and are constantly moaning that they simply ‘can’t cope’ with the latest crime figures. As legitimate as these claims may be, our precious plod does seem to find the time to, dance around maypoles, thread their boots with rainbow laces and appear in a whole host of police reality programmes!

Well, whereas laces and prancing about may not be very time consuming, I can assure you reality programmes most certainly are. There are 11 cop shows running at the moment, from Cops in the Sky to the most recent, which concerns seizing criminal’s assets (scraping the barrel comes to mind!).

Well I’ve done a number of reality programmes (including a few I would rather forget!), and I can assure you they take forever. Every five minutes you see on the screen can take hours to shoot. The retakes alone can be unbelievably time consuming. How can these ‘overworked’ rushed-off-their-feet officers of the law possibly find the time to be ‘reality stars’?

With the wide publicity television creates, public order and criminal acts are then copied by other members of toerag society, who would normally be wary of the unknown outcome their actions could bring.

One of the worst displays of contempt for the law I have ever seen was the disgraceful episode of the man at the Notting Hill Gate carnival who simulated a sex act on a WPC. Instead of arresting him there and then, the officer tried vainly to squirm away from him, looking for all the world like some embarrassed giggling young schoolgirl.

The whole unsavoury incident was captured on camera and received about a million hits on social media. No doubt this creep is still strutting around revelling in his new-found notoriety.

Mind you the fact that he was of ethnic origin meant they were probably too frightened to arrest him anyway (it’s a culture thing ennit!?).

No, I’m sorry but respect for the law is obtained by solving crime and putting away the bad guys, not strutting around like jumped up, ego tripping American TV robocops. Let’s all get back to the true reality. The fact that glamourising the police doesn’t do one iota toward rooting out criminals. Posing on telly and signing autographs simply doesn’t hack it. It’s time the powers that be put a complete ban on all cop reality shows. Let’s restrict their TV appearances to announcements of successful conclusions to crime investigations. Now THAT’S the way to earn respect!