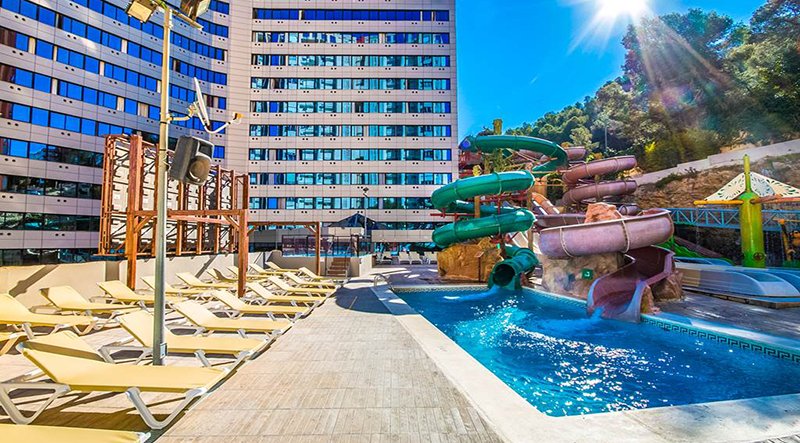 FOUR fake sickness fraudsters from the UK were sentenced by Liverpool High Court after admitting their gastric illness claims against Jet2holidays following an all-inclusive stay on Spain’s Costa Blanca were invented.
The four claimants in question are all from Liverpool, 43-year-old Michael Jameson, 35-year-old Claire Weir, 38-year-old Jane Weir and 63-year-old Janet Weir admitted their compensation claim, for more than €50,000 euros, was false.
The British family visited Benidorm in July 2015 with their four children, staying at the Aqua Magic Rock Gardens Hotel.
According to the family’s social media at the time, the holidaymakers wrote: “Loving every minute”.
A post from one of the claimants stated the trip to Benidorm was “the best holiday ever”.
Exactly one year later, in July 2016, the family claimed for negligence, seeking compensation from Jet2holidays after allegedly suffering from vomiting, stomach aches, nausea and diarrhoea.
The claim was accompanied by medical records coinciding with the dates of their positive social media posts.
Liverpool High Court heard last week that the family had enjoyed lagers, vodka, gin, amaretto and various other beverages during their all-inclusive stay.
Judge Choudhury QC remarked upon the “little short of overwhelming” evidence disproving the family’s claim.
The family admitted to the court that their claim was fraudulent and each of the claimants was sentenced to three months in prison, suspended for two years.
In addition to this, each claimant was ordered to pay a fine of £750 and to pay off the legal costs incurred by Jet2holidays.
Steve Heapy of Jet2holidays hailed the victory against the fraudulent claimants stating: “We have led the way to tackle the issue of false sickness claims so holidaymakers do not expose themselves to the risks that come with getting involved in such dishonest activity.”
“For some time, we have warned making false claims could lead to serious consequences; this ruling shows how serious they can be. It should leave anyone making a fake sickness claim in no doubt we will robustly investigate and defend any claims that are dishonest or illegitimate – and the courts will not hesitate to punish anyone engaging in such fraud.”