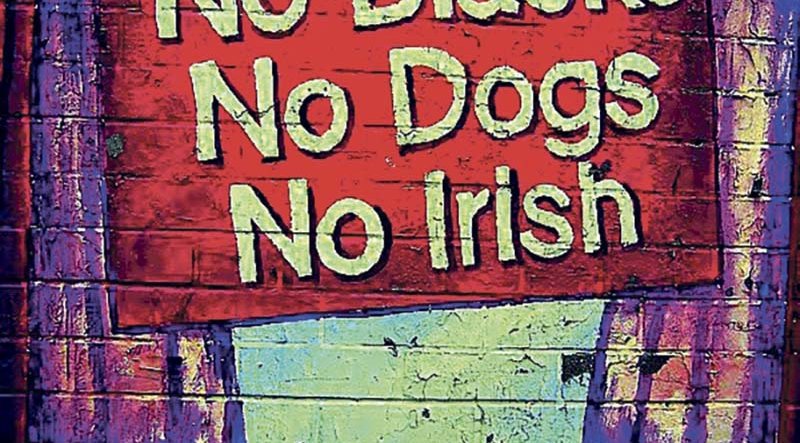 NO blacks. No Irish and no dogs. This is the oft publicised ‘unacceptable face of racism,’ of the late 50’s and early 60’s, when landladies, letting out rooms in areas of London and other cities posted this on the doors and windows of their establishments.

By today’s standards these signs do of course appear utterly disgusting and totally unacceptable. But times have changed drastically since those far more insular and uninformed times.

Back then, these were not blanket judgements, simply because of someone’s skin colour or country of origin. They were decisions made because of the general reputation gained by those who were considered foreigners at that time. Many Irish were not welcomed by landladies because the vast majority worked the roads and building sites, and on weekends were renowned for arriving back at all hours and keeping all the other tenants awake by bellowing Irish ditties at the tops of their voices.

People of colour had, in the main, only recently arrived from countries which were far less developed than the UK, with many having never even seen a toilet or experienced abodes with running water. Through no fault of their own, their general standards of living were vastly different to the locals. The landladies simply couldn’t cope with the culture differences. As for dogs, this was in no way a comparison. Merely that landladies didn’t want the barking to annoy the other tenants. We weren’t racists; we were merely treating those around us as we found them.

I personally NEVER judged people by creed or colour. In those heady flower-power days, I truly did believe the UK was the forerunner of how the whole world would be one day; convinced that in the words of Blue Mink and Madeline Bell, (who I know still peruses this column) that all we did indeed require was a great big melting pot, turning out coffee coloured people by the score!

For a time I lived in Bayswater’s All Saints Road. At the end of the road was a pub frequented mainly by the black neighbourhood community. I was often the only white face in the pub and thoroughly enjoyed the company and the Ska and reggae music while enveloped in the vaguely sweet aroma of ‘pot.’ No racism there either.

Some years later I returned to reminisce in the area which held so many memories. The taxi driver wouldn’t even drive down the street! I walked to the packed, still wholly black clientele pub and after a few minutes made the decision to leave because of the uncomfortable silence which had descended over the whole establishment. I truly was utterly shocked and disappointed.

Believe me, we were never the racists. Generally we welcomed those from different societies. We never envisaged that our liberal attitude would in later years bring the threat of other religions and cultures trying to alter our whole way of life and democratic liberty. No wonder the UK is now infested with racist views.

When you find yourself arguing racism with some snowflake or another, remember to remind them of one thing. Those people had all the best intentions in the world. And now find their very freedom of speech threatened! Just saying…