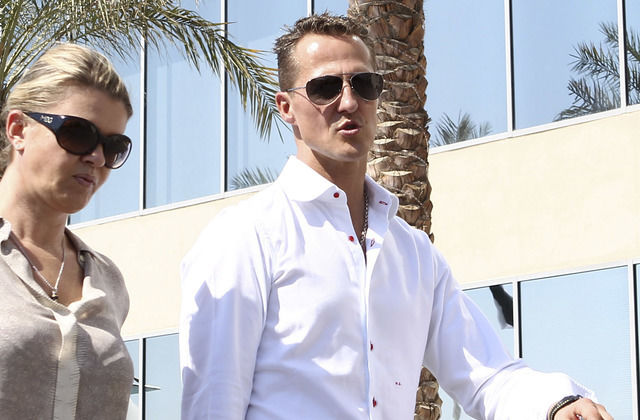 The former manager of Michael Schumacher has claimed requests to visit his former client have been knocked back by the German’s wife, Corinna.

Willi Weber has accused Corinna of blocking his attempts to see Schumacher out of fear that he will expose the F1 great’s condition to the public.

The F1 racing driver was put into a medically induced coma after a traumatic brain injury sustained while skiing with his son in the French Alps in December 2013.

Reports surfaced in September that the motorsport legend was transferred to a Paris hospital for secret treatment.

Weber has said on German TV “I know that Michael has been hit hard, but unfortunately I do not know what progress he makes.

“I’d like to know how he’s doing and shake hands or stroke his face, but unfortunately, this is rejected by Corinna.

“She’s probably afraid that I’ll see right away what’s going on and make the truth public.”

However, Weber says he refuses to give up hope that Schumacher can make a full recovery from his extraordinary ordeal.

“I firmly believe in Michael’s recovery, because I know he is a fighter,” Weber said.

“If there is a chance, he will use it. That cannot be the end. I pray for him and am convinced that we will see him again.”

Webers comments came after our Euro Weekly News article on Sunday as Corrina held her first interview paying tribute to her husband.

We at the Euro Weekly News spoke to one of our readers who worked for many years with the driver and in the sport and posted on our Facebook page on Sunday for his views.

he said ” Weber is a talker, yes he was his business manager but it was simply for financial reasons only- to which he worked along side Corinna who was the real boss – Michael himself his concentration was fully on his driving and working with his real team mates – we used to ignore Weber as he strut about – Corinna’s private life is her private life and choice – nothing to do with business – she’s too clever anyway”