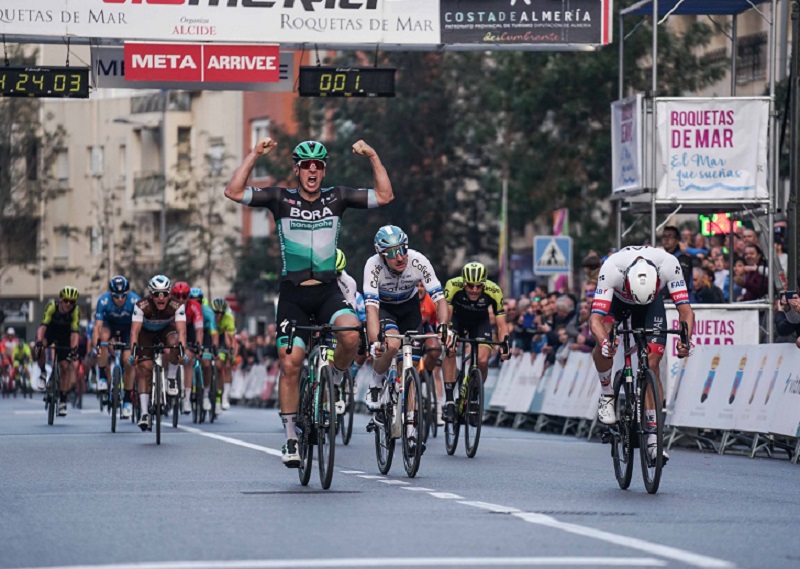 THE Almeria cycling classic was an all-round triumph.
Sunday’s thrilling ‘Clasica’ race attracted 20 of the best teams in the world and reached 64 countries. It was broadcast in 21 languages on Eurosport thoroughout the continent, as well as on other channels as in the US, South America and New Zealand.
This was the 33rd edition of what is now a top level sports event. The race is now in the UCI Pro Series category, the second most important at international level.
Cyclists battled it out over a tough 187-kilometre route. Starting and ending in Roquetas de Mar, they went through Adra, Berja, Balanegra and El Ejido.
German rider Pascal Ackermann (Bora-Hansgrohe) repeated his victory of last year and was first across the finishing line following a hard-fought final sprint in Avenida Juan Carlos I cheered on by the crowd.
“I have finished second twice in races in Spain this year, so it was nice to finally cross the line first”, Ackermann commented.
“It was a difficult race due to the wind, but my teammates did a great job, supporting me 100 per cent”, the champion added.
Norwegian competitor Alexander Kristoff (UAE Team Emirates) came in second and the Italian Elia Viviani (Cofidis) took third place on the podium.
Speaking before the race, Diputacion de Almeria President Javier A. Garcia said he hoped it would in the near future be able to boast the logo of the UCI World Tour, the maximum international category.
Garcia congratulated the race organisation team for “for putting Almeria on the international map for this sport”.
He said they had managed to put the race in such a high profile position “without sacrificing a shred of its origins, when 33 years ago La Clasica started out as the ‘Ruta de las Hortalizas’ in a clear and well-deserved homage to our agriculture and to cycling.”
The Diputacion President underscored the major impact of the cycle race on the Costa Almeria economy and tourism. The event brings some 500 people to the province, he pointed out, while the TV coverage meant that “more than 200 million homes throughout the world will discover Almeria.”
There is, Garcia said, “a close relationship between sport and tourism in our province, a uniqueness which no other province in Spain or in Europe have, and we have to boast about that and say that we have the best place in the world to practice cycling or any other kind of sport.”