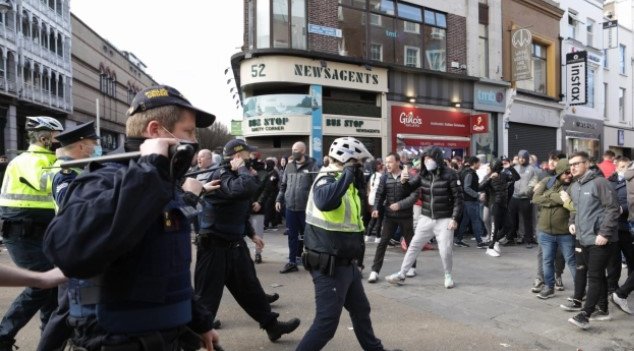 With Ireland facing its ninth week of Level 5 restrictions, hundreds of anti-lockdown protestors were involved in angry confrontations with Gardai in Grafton Street in Dublin’s city centre on Saturday afternoon (February 27), as they tried to march to St Stephen’s Green Park, but were prevented from entering after officials from the Office of Public Works closed the gates.

Video footage on social media showed one protestor aim a firework at Gardai before it went off, while others not wearing face masks are seen throwing missiles and other items, as the police pushed them back waving their batons, and Garda Commissioner Drew Harris reported that around 20 people were arrested.

Simon Harris, Ireland’s Minister for Further and Higher Education tweeted, “Pure thuggery on the streets of Dublin today. It’s not a ‘protest’, it’s an attack on our national effort. The abuse directed at the Gardai is sickening and shameful. Disgraceful. Thoughts with the Gardai and their families”.

Neale Richmond, from Fine Gael TD voiced his thoughts, “From the outset, this protest was ill-advised, fuelled by conspiracy theories and championed by individuals seeking to manipulate the genuine fears of many vulnerable individuals”.

Continuing, “It was disgraceful to see this protest descend into violent scenes with brave members of An Garda Siochana subjected to intolerable physical and verbal abuse. Some of the eye witness footage circulating is extremely disturbing and every public representative should condemn these awful scenes”.

Mr Richmond added, “The footage appears to show a lit firework being thrown at members of the gardai by one protester, which is truly shameful. These brave men and women risk their lives every day in the service of the people of our State and what they were subjected to today is utterly appalling”.

A spokesman for An Garda Siochana said, “A number of traffic diversions and other policing measures are currently in place in Dublin this afternoon, Saturday 27th February 2021 in response to a demonstration in the city centre area. A policing plan has been implemented and An Garda Siochana will provide a full update when this operation has concluded”.

Thank you for taking the time to read this news article “Dublin Anti-Lock Down Protestors Clash With Gardai”.