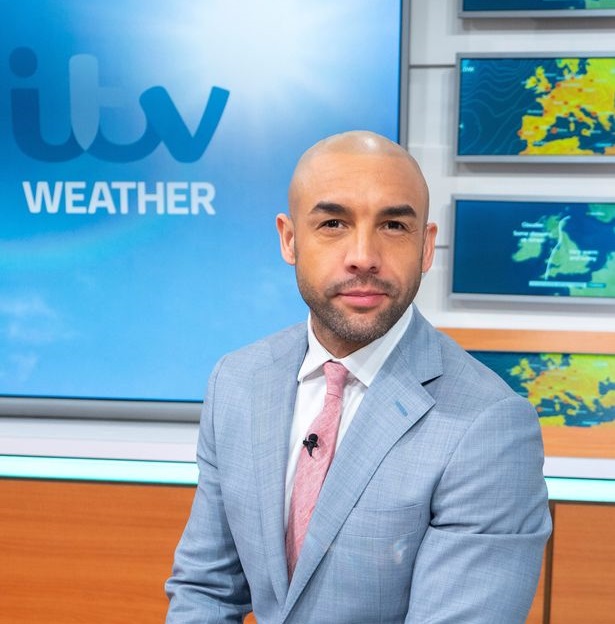 GOOD Morning Britain’s Alex Beresford has apparently “become famous overnight” in America and gained an amount of celebrity status following his on-air row with Piers Morgan. Alex is now being celebrated in America for standing up to Piers, with the spat being covered in The Los Angeles Times.

The 40-year-old star won praise after Tuesday’s episode of the breakfast show when he confronted the 55-year-old host on controversial comments he’d made about Meghan Markle.

Culture columnist and critic Mary McNamara asked Americans to “start talking” about the weather presenter after he spoke up for a “woman repeatedly getting torn down”.

She wrote: “Alex Beresford, on the other hand, is the opposite of boring. He’s the guy who came out of nowhere to say what many were thinking, the Good Morning Britain weather presenter who decided he could not remain silent while a woman was repeatedly getting torn down. “Even if speaking out meant facing a senior colleague’s on-air wrath.”

McNamara added: “But for Beresford to highlight the rift on-camera was remarkably brave… As a person of colour, it is understandable that he, like [Trisha] Goddard, would have a hard time remaining silent when Morgan accused the duke and duchess of crying “racism” where none existed.”

During the row, Alex put Piers in the hot seat when he questioned his motives for attacking Meghan. “This is just diabolical behaviour,” he said.

Yesterday, Alex released an emotional statement after Piers’ GMB departure – insisting that it was never his intention for him to leave the show, he just wanted him to “listen”.

Robert Rinder is said to be one of the favourites to replace Piers Morgan on Good Morning Britain. Rob, 42, is one of the contenders to join Susanna Reid as co-host. An insider told The Sun newspaper: ‘The dynamic between the two presenters would be instant because they have been good friends for years – even going on holiday together.

Other names thrown into the mix include current GMB stars Ben Shephard, Adil Ray, Ranvir Singh and Alex Beresford of course, whose powerful speech on the show on Tuesday prompted Piers to storm off set.