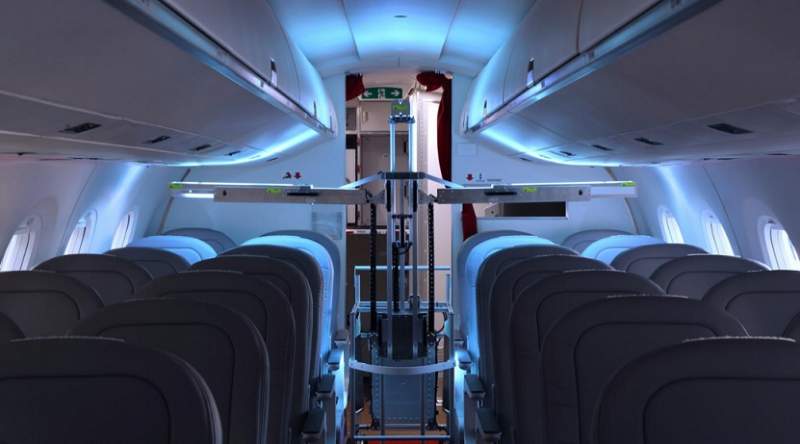 Air Travel Given Boost As Robots Use UV Light To Zap Viruses Aboard Passenger Planes.
Air travel has been given a boost as a robot armed with virus-killing ultraviolet light is being tested on Swiss aeroplanes, in an idea aiming to restore passenger confidence and spare the travel industry even more pandemic pain.

Aircraft makers still must certify the devices and are studying the impact their UV light may have on interior upholstery, which could fade after many disinfections. UVeya co-founder Jodoc Elmiger said he is hopeful that robot cleaners could reduce people’s fear of flying, even as COVID-19 continues to circulate.

“This is a proven technology, it’s been used for over 50 years in hospitals and laboratories, it’s very efficient,” Elmiger said on Wednesday.

“It doesn’t leave any trace or residue. If our passengers, if our crew know our aircraft are safe — that there are no viruses or bacteria — it could help them to fly again,” Mehdi Guenin, a Helvetic spokesman said.

Elmiger’s team has built three prototypes so far, one of which he demonstrated inside a Helvetic jet at the Zurich Airport, where traffic plunged 75% last year.

The robot’s lights, mounted on a crucifix-shaped frame, cast everything in a soft-blue glow as it slowly moved up the Embraer’s aisle. One robot can disinfect a single-aisled plane in 13 minutes, from start to finish, though larger planes do take slightly longer.

Thousands of British ex-pats in Spain have not seen their families for over a year as flights were cancelled due to the pandemic. Looking back to 2020, it seemed both Spanish and British governments banned travel between the countries almost on a monthly basis. All the major European airlines then became involved in a refund fiasco which has now mostly been resolved.
With this new system and the introduction of digital vaccine passports, it is hoped that restrictive free travel can resume once again very soon.