Athletic Bilbao Fans And Police Clash In The Street 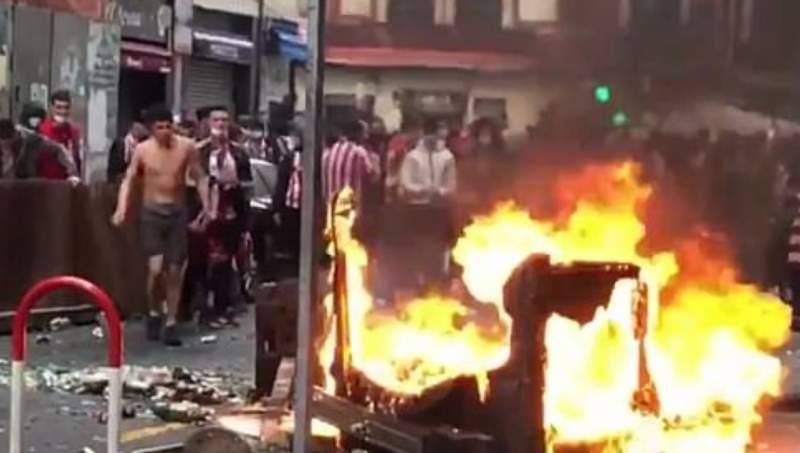 Athletic Bilbao fans have been involved in clashes with the police in the streets of the city, as 1000s of football fans congregated to celebrate ahead of tonight’s Copa del Rey final against rivals Basque region rivals, Real Sociedad.

Video footage posted on social media shows thousands of Bilbao supporters packing the streets close to Athletic’s San Memes stadium, and the Local Police had to try to disperse the growing numbers, who were breaking the coronavirus restrictions.

Missiles and bottles can be seen in the videos being thrown towards the officers, glass smashing all over the floor, and at one point, what looks like a large rubbish container is set alight in the street, while in another video a fan is seen to climb to the top of a lamppost before jumping off it, straight onto the street, but he doesn’t appear to injure himself, instead, jumping up and continuing to party with his fellow fans.

The supporters are out on the street ahead of, and whilst tonight’s Copa del Rey Final is taking place, which is actually the 2020 final, as it was delayed due to the pandemic, and now is taking place behind closed doors in the La Cartucha stadium in Sevilla, with the 2021 final, in which Bilbao will also take part, against Barcelona, coming up in a few weeks time.

This action is bound to attract a problem with law enforcement as Spain has a strict social distancing and facemask restriction in place across the country, and many of the people can be seen to not be wearing facemasks, and not respecting the distancing, as they did on Thursday when gathering at Bilbao airport to wave their team off as they departed for Sevilla, attracting the wrath of many Spaniards.

In San Sebastian on Friday, there were similar scenes as supporters gathered to wave their Real Sociedad team bus off, again in breach of coronavirus pandemic protocols, as reported by dailymail.co.uk.

At the time of writing, Real Sociedad had just won the 2020 Copa del Rey Final by 1-0, with more trouble erupting in the streets.