Spain Formally Presents Its Economic Recovery Plan To The EU 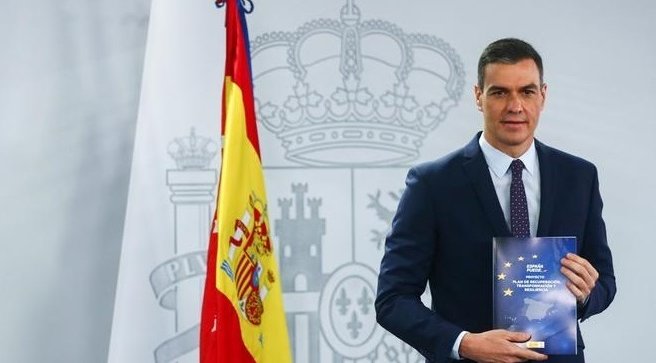 Spain Formally Presents Its Economic Recovery Plan To The EU.

Spain has said it will press ahead with its economic recovery plan despite an expected delay in the arrival of European Union support funds, financing initial investments via government borrowing, President Pedro Sanchez said on Tuesday, April 27.

The Community Executive now has two months to evaluate the plan and, if it gives its approval, the Member States will then have four weeks to approve it by qualified majority.

Spain formally presented its recovery, transformation and resilience plan to the EU with details of the reforms and investments, amounting to €70,000 million, which it plans to execute between 2021 and 2023 in order to receive aid from the European recovery fund.

“We have received the recovery plan from Spain,” said the president of the European Commission, Ursula von der Leyen, on the social network Twitter. The European funds will help “to finance the country’s recovery through projects related to the ecological and digital transition, cohesion and gender equality,” said Von der Leyen.

The projects of the Spanish plan are mainly focused on the period 2021-2023 and these cover “seven European emblematic areas”, the note continues. Denmark, Luxembourg and Latvia also deposited their recovery plans today, Friday, April 30, according to the European Commission in a statement.

Brussels expects a “significant number” of plans from other countries to arrive in the coming days, according to a community spokesman. This Friday ended the indicative deadline for the Twenty-seven to deliver their recovery plans, a date that, for now, nine of the community partners have managed to meet.