Guardia Civil Investigate A Man In Cuenca For Animal Abuse 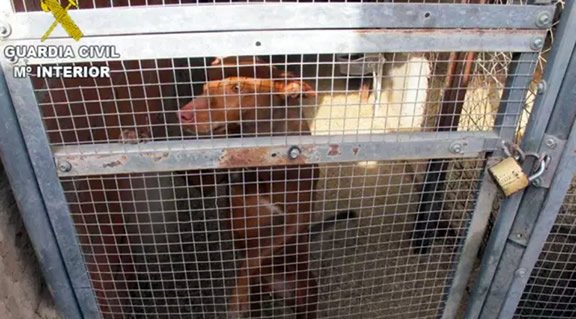 GUARDIA CIVIL Investigate A Man In Cuenca For Animal Abuse, including operating on them to stop them barking

Officers of the San Clemente Nature Protection Service Patrol, of the Cuenca Guardia Civil Command, have detained a man in the town of Valverde del Júcar, in the province of Cuenca, Castilla-La Mancha, suspected of animal abuse.

After receiving several complaints about the man, reported to be in alleged infraction of Law 7/2020, of August 31, on welfare, protection, and defence of the animals of Castilla-La Mancha, officers, accompanied by official veterinarians, made an inspection of his facility, where they discovered eight dogs displaying symptoms of neglect, and without the essential minimum hygienic measures.

In a press release, the Guardia Civil reported carrying out their joint inspection in March 2021, where, after an initial inspection of the facility, they happened across a vehicle hidden on the farm, which contained eight adult dogs of small breeds: Maltese, Pomeranian, and Chihuahua, that had obviously concealed from the inspectors when they arrived.

An examination of the dogs found some of them to be missing any identification microchips, and any records of the mandatory vaccinations and deworming treatment, plus the man could not prove ownership of the animals, that even to the untrained eye, appeared to be suffering from conjunctivitis and ocular wounds, according to europapress.es.

A further examination by the vets found that six of the eight canines had undergone a cordectomy, a surgical practice consisting of cutting the vocal cords of the canids to prevent them from barking or howling.

With all the above as evidence, the Guardia Civil opened a case against the man, for the alleged commission of a crime of animal abuse prescribed in article 337 of Organic Law 10/95, of November 23, of the Penal Code, and the dogs were confiscated and relocated to an animal shelter in the province of Toledo, until such time as the case is completed against the man who is now under investigation.