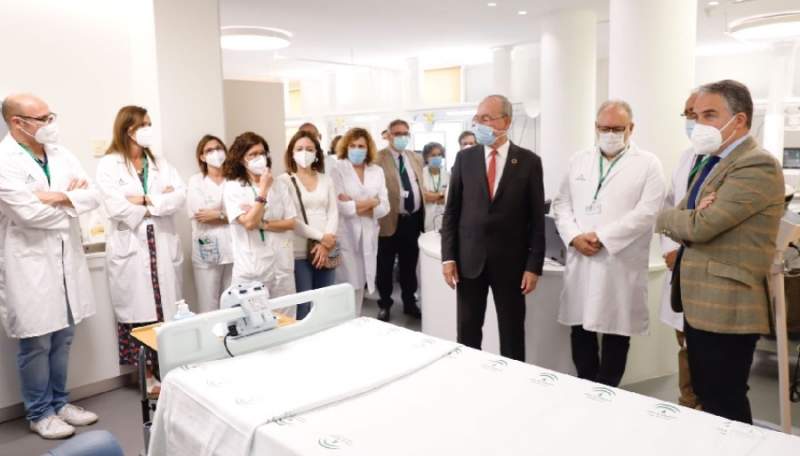 Elías Bendodo, the Minister of the Presidency, Public Administration and Interior, today, Saturday 29, inaugurated the new specialised unit for the treatment of stroke patients at the Virgen de la Victoria Hospital, in Malaga city, a unit that is expected to increase the survival rates, or at least improve the prognosis, of more than 1000 patients annually.

This new stroke unit, costing €180,000, dedicated exclusively to stroke care (first 24 to 72 hours), is of special importance to the city, because up until now, those who suffered a stroke in Malaga could only be treated in a specialised way at the Regional Hospital, as the minister stated, “Today, the Andalucian Government ends the deficiency suffered by the province by launching this new unit”.
The stroke unit will have eight beds with multi-parameter monitoring of vital signs and electrocardiography – to help with the detection of arrhythmias – a storeroom for medicines and specific consumables, a medicine preparation area, and a surveillance and work area for health professionals, while also being equipped with high-end ultrasound-Doppler equipment, which can carry out early studies of the state of the patients’ cerebral circulation and transcranial monitoring of their evolution.
It will also serve the purpose of receiving patients from other hospitals in the province that do not have the necessary Neurology services, such as Costa del Sol hospital, Serranía de Ronda, HARE de Benalmádena, and Valle del Guadalhorce Hospital, as reported by juntadeandalucia.es.

Mr Bendodo also visited ongoing works in the same hospital where an investment of more than €1m will see a doubling of the space allocated to scientific research for the Biomedical Research Institute (IBIMA), an entity in which both the Clinical Hospital, the Regional Hospital, and the UMA are integrated.