Recent and interesting news from across Mallorca 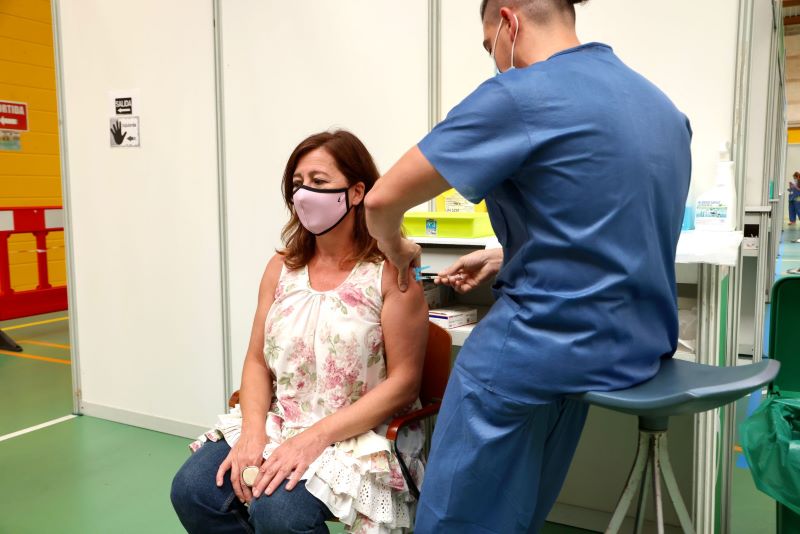 President vaccinated
IT was the turn of the President of the Balearic Government, Francina Armengol to receive her first vaccination against Covid-19 on May 29 receiving the Pfizer vaccine at the Germans Escalas Sports Centre in Palma as she was born in 1971 and therefore became eligible for vaccination.
More buses
THE EMT bus company in Palma has increased the frequency of service on eight routes to better meet the increase in mobility that is taking place in order to facilitate travel by public transport from the Palma suburbs to the beaches, the airport and leisure centres.
Dog rules
CAPDEPERA Council has been at various markets giving out information on the proper way to look after dogs and to remind owners that they must not be allowed to urinate on doors or facades of buildings and to collect all excrement in disposable bags (samples of which were handed out).
Fire starter
A 55-year-old man has been arrested by the Local Police in Andratx after he appeared to set fire to his house and then attacked an officer who was trying to calm him down on the evening of May 31. Neighbours were evacuated but returned soon after.
Football triumph
ALTHOUGH they could only draw their last match of the season and therefore didn’t come top of Division 2, Mallorca FC who are bouncing back to La Liga were guests of honour at a reception hosted by the Consell de Mallorca and Palma Council.
Unemployment figures
ACCORDING to figures released by the Ministry of Labour and Social Economy, the Balearic Islands recorded a total of 75,351 unemployed during the month of May, which represents a drop of 8.18 per cent (6,715) over the April figures but this is still much higher than pre-pandemic.
Netflix location
NOW that the incidence of coronavirus in Mallorca has dropped so much, the island is once again attracting film makers, especially Germans and it is understood that a new Netflix production will be filmed in Soller and the surroundings starting in August.
Healthy eating
REPRESENTATIVES of Palma Council have met with organisations that work with children and adolescents at risk of social exclusion to discuss how best to educate parents and encourage children on the most appropriate and healthy food that is available at an affordable cost
Sad loss
A POPULAR priest aged 90, Antoni Estelrich Calafat is believed to have had a heart attack when he went for a swim on June 1 in the sea off Son Baulo beach, Can Picafort as after a few minutes in the water, his lifeless body returned to shore.