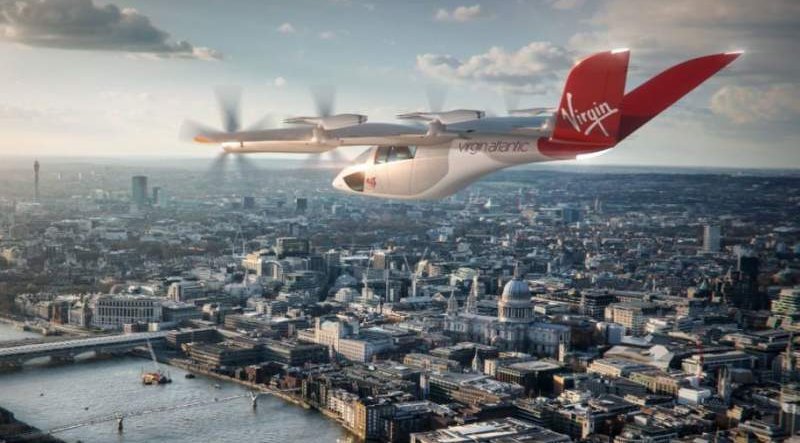 UK carrier Virgin Atlantic aims to explore the development of a short-haul electric vertical take-off and landing (eVTOL) network which will be initially focused on London Heathrow, London Gatwick and Manchester.

The airline’s plans for the network are part of a new partnership the company has with UK-based Vertical Aerospace – the carrier will have the option to acquire up to 150 of the manufacturer’s new fully-electric eVTOL aircraft, the VA-X4.

Virgin Atlantic envisions a future joint venture with Vertical Aerospace to establish the network, on which the VA-X4 fleet would operate under the airline’s brand.

“The goal is to enable sustainable, price competitive, regional connectivity across the first and last 100 miles of the customer journey,” said the carrier.

The airline has agreed an option to buy between 50 and 150 of the four-passenger eVTOL (electric Vertical Take-Off and Landing) aircraft to be built by Bristol-based Vertical Aerospace. Impressed with the idea, American Airlines has also pre-ordered up to 250 aircraft with an option for a further 100.

The fully electric VA-X4 is described as a “zero-emissions, near-silent aircraft” with a range of more than 100 miles powered by four tilting advanced rotors at the front and stowable rotors at the rear.

The eVTOL aircraft is capable of speeds more than 200 mph, Vertical Aerospace and Virgin Atlantic will seek to establish short-haul connectivity between UK cities and airport hubs starting with Heathrow, Manchester and Gatwick.

The aircraft would cut the 56-mile journey from Cambridge to Heathrow down to just 22 minutes, in comparison to a one-hour 30-minute car journey.

With 37 towns and cities with populations over 100,000 within 100 miles of Heathrow, the VA-X4 offers “huge potential” to support zero-emissions short-haul transfers for 7.7 million customers outside the capital for flights to and from the UK’s main hub airport.

The airline believes the aircraft is set to revolutionise urban mobility and electrify air travel, with certification to the same safety standards as commercial airliners.

Vertical Aerospace plans to combine with a special acquisition company (SPAC) via a merger with Broadstone Acquisition Corporation and undertake a listing on the New York Stock Exchange later in 2021 to raise the capital required to bring the aircraft to market.

Virgin Atlantic chief executive Shai Weiss said: “With innovation and sustainability leadership firmly in our DNA, we are excited to be partnering with Vertical Aerospace to pioneer sustainable and zero emissions air travel in the UK.

“We pride ourselves on building enduring strategic partnerships and are thrilled to be working alongside Vertical in its mission to bring eVTOL travel to the UK. Our partnership includes an option for Virgin Atlantic to acquire up to 150 eVTOL VA-X4 aircraft and exploration of a joint venture to bring short-haul, electric vehicle connectivity to cities and our UK airport hubs, starting with London Heathrow as well as Manchester and London Gatwick.”

Vertical founder and chief executive Stephen Fitzpatrick added: “This is the most exciting time in aviation for almost a century; electrification will transform flying in the 21st century in the same way the jet engine did 70 years ago.

“By bringing together two entrepreneurial organisations who share the same passion for innovation and best in class partnerships, we can revolutionise urban mobility in the UK and electrify air travel. We look forward to working closely with Virgin Atlantic and completely changing how people think about flying through the skies.”