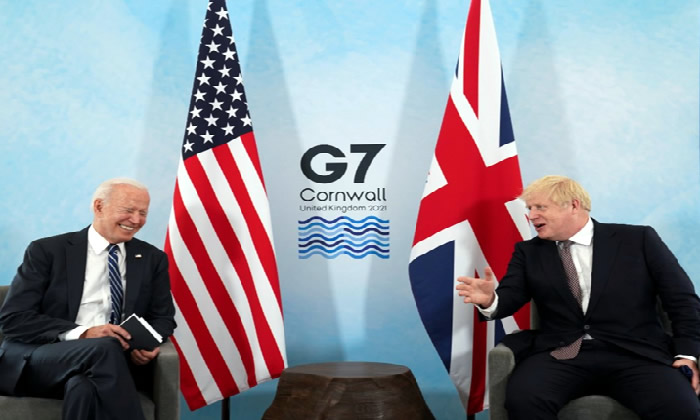 At the end of the G7 summit in St Ives, Cornwall today, Sunday 13, when answering questions from reporters, Prime Minister Boris Johnson seemed to drop a hint to US President Joe Biden that he should not get involved in the UK’s bubbling diplomatic row with the European Union.

Joe Biden – who has Irish ancestry – has been vocal in recent days about the Brexit issue, saying that Britain and the EU should find a solution, and not allow the Good Friday Agreement and peace in Northern Ireland to be jeopardised.

Mr Johnson told reporters, “I think that with the greatest respect to all our friends around the world, this is something that I think we’re going to fix. We’ll fix it in a pragmatic way but this is about making sure we protect the Good Friday peace process, and protect the territorial integrity of the UK”.

While the G7 summit has been going on, the prime minister has also had his hands full dealing with Brussels, and the argument over the implementation of the Northern Ireland Protocol, with Britain accusing EU officials of being heavy-handed in the way they are trying to implement the Protocol.
Brussels in response though has claimed that the UK must face up to the consequences of leaving the single market, and implement the Protocol in full, with the argument including the need for stricter customs checks on some goods that travel from Britain to Northern Ireland.
It is believed that last week, on Thursday 10, according to the Express, before the G7 talks in Cornwall started, the two presidents had a bilateral meeting – with the US apparently issuing Britain with a demarche, which is a formal diplomatic complaint – in which Biden warned the UK about its handling of the Brexit deal, with Washington reportedly laying the blame at Britain’s feet for inflaming tensions with the EU.