Is This Why Russia Shot At HMS Defender? 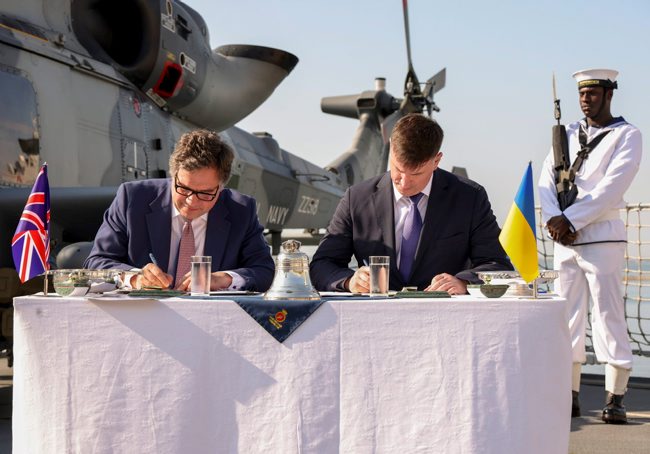 Russian claims that it fired on HMS Defender which is in the Back Sea on a NATO mission come just two days after the UK signed an agreement to boost Ukraine’s naval capabilities onboard the warship.

BRITAIN and Ukraine inked a naval cooperation agreement on June 21 onboard the HMS Defender. The deal will include the development of a new naval base in the Sea of Avoz and eight hi-tech naval warships for Ukraine.

Russia has been meddling in Ukrainian affairs for more than a decade since the ex-Soviet country made a bid to sign a cooperation agreement that would bring it closer to the EU. In 2014 Russia annexed Crimea and has encouraged separatists in eastern Ukraine.

The agreement includes the introduction of new capabilities through the delivery of new naval platforms and defensive shipborne armaments, the training of Ukrainian Navy personnel, the creation of new naval bases, and the purchase of two Sandown class mine countermeasure vessels.

The Minister for Defence Procurement Jeremy Quin said, “The UK and Ukraine have a close defence relationship, and we continue to strengthen this partnership to help deter shared threats.

“I am delighted that British and Ukrainian industry will work together on these projects, which will provide world-leading capabilities and provide opportunities for both our nations to boost our shipbuilding enterprises,” he added.

The Ukrainian Ministry of Defence said, “Ukraine and the UK are good friends and allies. Today’s Memorandum gives a new impetus to our co-operation in naval industry and will facilitate further development of the Ukrainian Navy. We appreciate the British support and value your experience.”

The deal is likely to have angered Moscow as it includes the following projects:

During the visit by Ministers a trilateral exercise between the UK, Ukraine and the US took place on board the ship.

Today, June 23, the Russian Ministry of Defence claimed it had shot at HMS Defender because it had breached Russia’s territorial water.

The UK however swiftly denied an incident had taken place and said Russia was conducting regular exercises and did not fire at the warship.