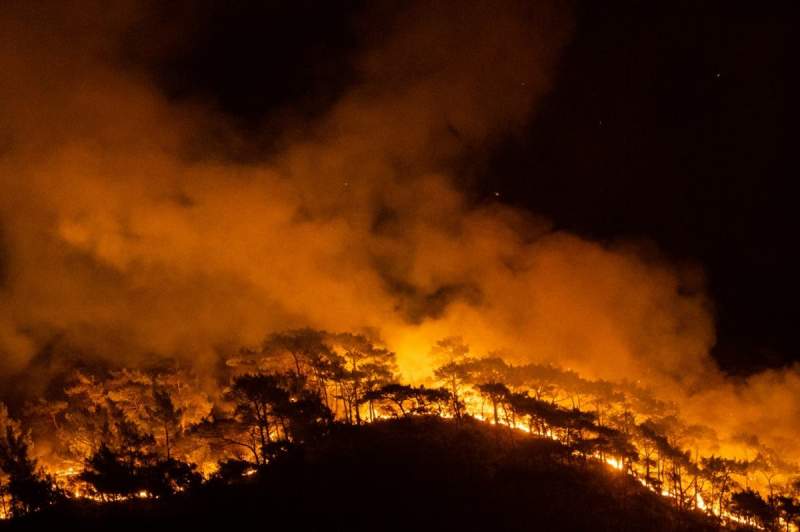 Turkey appeals for international help as it battles some of the worst wildfires for decades. image: Twitter

Turkey appeals for international help as it battles some of the worst wildfires seen in the country for decades.

Turkey’s President Tayyip Erdogan has appealed for international help to tackle the fires that are ravaging the country.

Erdogan said he had increased the number of planes fighting the fires from six to 13. Planes from Ukraine, Russia, Azerbaijan and Iran, and thousands of Turkish personnel, as well as dozens of helicopters and drones, were assisting the firefighting efforts.

At least five people have died from the fires in Manavgat and one died in Marmaris- both towns are located on the Mediterranean and are popular tourist destinations.

Health Minister Fahrettin Koca said 400 people affected by the fires in Manavgat were treated at hospitals and have now been released, while 10 others were still hospitalised suffering from burns. In Marmaris, 159 people were treated at the hospital with one person still undergoing treatment for burns.

In the small village of Kacarlar, on Turkey’s southern coast, farmers are facing apocalyptic scenes as wildfires continue to sweep the country.

“The animals are on fire,” 56-year-old resident, Muzeyyan Kacar, told CNN. “Everything is going to burn. Our land, our animals and our house. What else do we have anyway?”

Hundreds of miles west, in the tourist hotspot of Bodrum, more than 1,000 people were evacuated by boat on both Sunday and Saturday to escape the wildfires.

At least eight people have died in more than 100 blazes that broke out earlier this week, according to the state-run Anadolu news agency. The flames have been fueled by scorching summer temperatures and conditions that experts say have been worsened by climate change.

Seven people were killed in the fires in Manavgat, Antalya Province, and the eighth victim died in Marmaris, Anadolu reported. The latest victims include a Turkish-German couple who were found in a house, it said.