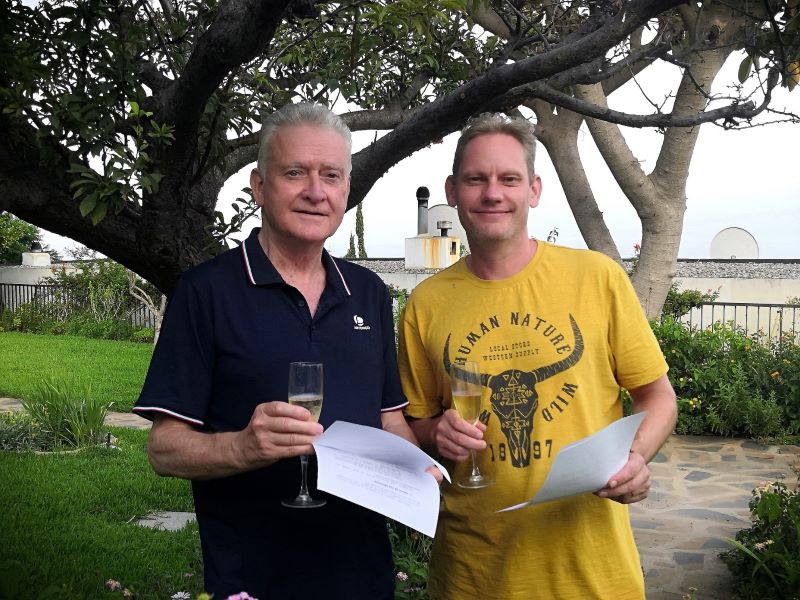 Patrick (in the dark shirt) and Phil Credit: Patrick Knowles

Costa del Sol resident writes new anthem for Manchester City to coincide with unveiling of three legends’ statues.
Ever since he was a child growing up in Manchester, long time Costa del Sol resident Patrick Knowles has been devoted to Manchester City Football Club.
Having been a popular singer playing from Benalmadena to Estepona every weekend in the late 70s and 80s, he homed his song writing skills and most recently his composition, Give Me Back My Broken Heart was released by the singer Marcell and has already received 700,000 downloads.
Patrick became aware that Manchester City were planning to unveil statues outside the Etihad Stadium dedicated to three of their most recent great players, Vincent Kompany, David Silva and Sergio (Kun) Agüero.
The challenge for him was whether he could write a new song for the unveiling and get it played by Manchester City on the day.
Back in the late 1980s the football club was not doing too well and the story goes that when they finally beat Aston Villa in 1990 to avoid relegation, fans started singing Blue Moon as it was once in a blue moon that the team ever won!
Things have of course changed, but this has been the favourite song of Manchester City fans for the last 30 years and more.
Working with musician and arranger Phil Wilkinson, Patrick created the lyrics for Ol’ Blue Moon and the voice of the song which will be played at the unveiling of the statues.
Originally, it was planned that all three statues would be unveiled on May 13, 2022 which is the 10th Anniversary of City beating QPR to take their first Premier League title following the takeover by Sheikh Mansour.
There has however been a change of plan and whilst the Agüero statue will be unveiled on that date, the other two will be revealed to the public this coming Saturday, August 28 an hour or so before the kick off of the home game against Arsenal.
Clearly Patrick can’t get back for this match but hopes that pandemic allowing he will hear his song being played outside the stadium in Ashton New Road on May 13 next.
Thank you for reading Costa del Sol resident writes new anthem for Manchester City’ and remember that all articles produced by Euro Weekly News may be accessed free of charge.