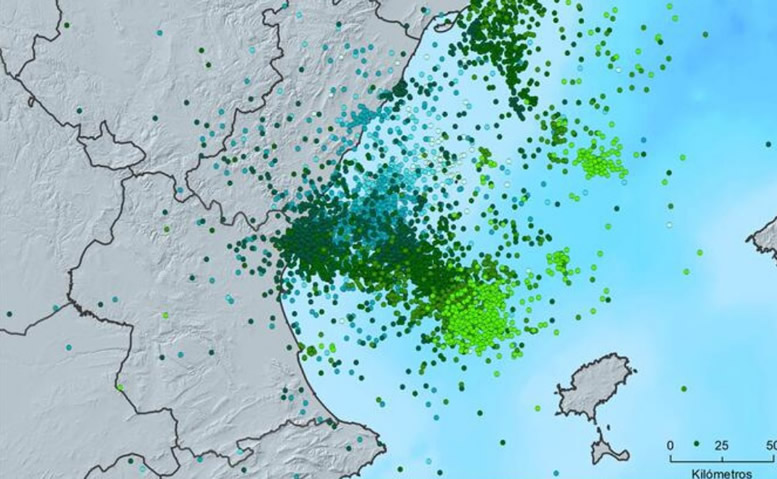 AEMET reports the Valencian coastline of Sagunt and Canet d’en Berenguer was hit by more than 7,000 lightning discharges on the morning of Monday, August 30

More than 7,000 discharges of lightning hit the coast of the Camp de Morvedre region during the last morning of Monday, August 30, where torrential rainstorm has left records of up to 180 litres/m2) in the Valencian regions of Sagunt and Canet d’en Berenguer.

The torrential rains in the early morning were located especially in the coastal area of ​​Camp de Morvedre, where specifically, according to the State Meteorological Agency (Aemet), between 2am and 9am, more than 7,000 lightning charges were registered.

Aemet reports that on the map of the lightning discharges registered on Monday morning up until 9am, it was clear that the convection developed mainly over the sea, fuelled by the Mediterranean instability, detailing that when storms from the sea make landfall, “they discharge with torrential intensity in very focused areas of the coast”, as was the case on the coast of Camp de Morvedre on Monday morning.

The 24-hour accumulated precipitation estimate from Aemet, based on radar data, includes two torrential rain zones: the Plana Alta, between Benicassim and Grau de Castello, and the Camp de Morvedre coastline, between Canet d’en Berenguer and the port of Sagunt.

Aemet has updated the active notices for this Monday and Tuesday, August 31, in the Valencian Community, specifically, the entire province of Castellon is on an orange warning for storms, and possible rainfall of up to 40 litres/m2 in an hour, while the coastline and interior of the province of Valencia have been issued with a yellow warning for rainfall of up to 20 litres/m2.

The record-breaking torrential rainstorms on Monday, August 30, saw up to 180 litres/m2 of rain in the Valencian towns of Sagunt and Canet d’en Berenguer, which forced firefighters to intervene on numerous occasions, having to pump water out of some areas, rescue vehicles, and cut flooded streets, with the rain also interrupting the circulation of Cercaníis trains between Puçol and Sagunt for a few hours, as reported by moncloa.com.