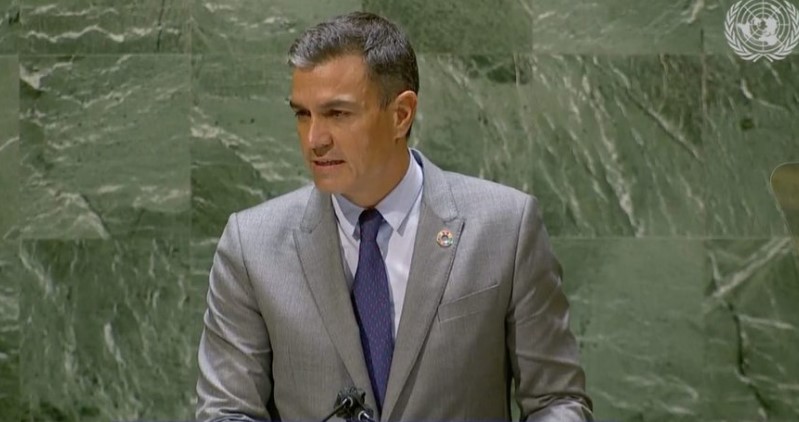 The President of the Spanish Government, Pedro Sanchez, stood up before the plenary session of the United Nations General Assembly in New York today, Thursday, September 23, and warned that he believes “democracy is threatened”, calling for its “defence”, as the only alternative against any totalitarian, exclusive and intolerant drift”.

During a rousing speech at the UN headquarters, President Sanchez said, “Without a doubt, democracy is threatened. Let us be aware of it. It is not a gift that has been granted to us, but a long and hard historical conquest that we must take care of and protect”.

He pointed to the recent Afghanistan crisis that occurred after the departure of US troops and the arrival of the Taliban into power, as a clear example of how democracy is at risk, adding that “the struggle for democracy not only refers us to Afghanistan”, but, “affects the five continents, and is also being waged in the most developed countries of the world”.

“It is a daily fight against those who want to impose inequality, benefiting a few; those who seek to exclude or blame the most vulnerable minorities; those who call for hatred for reasons of origin, sex or belief; those who appeal to walls and borders to prevent the advance of the ideas of equality and freedom, of fraternity”, he stated.

The President also assured that, “there is no racial, cultural, historical or anthropological reason that justifies the mutilation of freedom”, adding, “That is why the only way is democracy, it does not need explanations or alibis”, while recalling the words of Fernando de Los Rios, the Spanish socialist politician from the first half of the last century, “When they asked him ‘Freedom for what?’, he replied simply, ‘Freedom to be free'”.

Concluding, he said, “the democratic model is the only one that guarantees the defence and protection of human rights and individual freedoms. It will continue to be the beacon and guide for our actions. We will continue to defend that every human society, anywhere on this planet, can live according to the basic principles of freedom, dignity, social justice, and participation, respecting the agreed laws, the will of the majorities, and the rights of minorities”, as reported by elespanol.com.