Spanish PM travels to La Palma for the fifth time 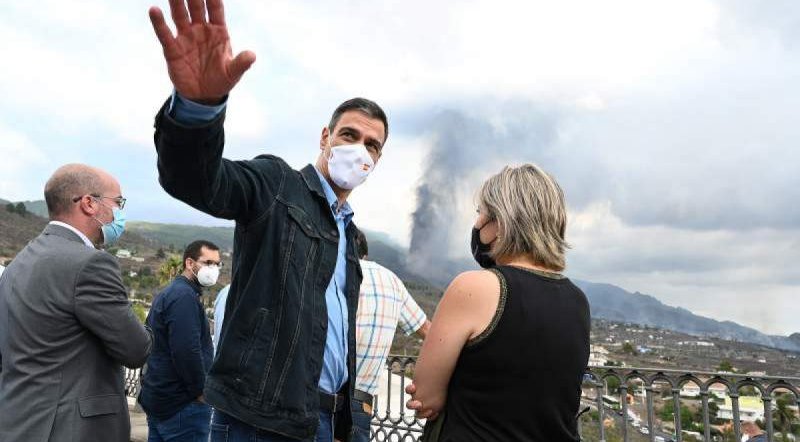 The president of the Spanish government, Pedro Sánchez, is travelling to La Palma today, Saturday, October 23, to learn about the evolution of the situation caused by the eruption of the Cumbre Vieja volcano on the ground, according to local media sources on the island.

The first visit was on September 19, the day the eruption began, causing the PM to postpone a planned trip to New York- which he later completed successfully.

The next few hours will be decisive to know the future of La Laguna and other adjacent neighbourhoods, both Los Llanos de Aridane and neighbouring Tazacorte, have been evacuated since last Wednesday due to the uncertain advance and danger of the lava.

The two lava flows from the La Palma volcano have now come together. Scientists believe the best scenario is that they “join” the other stream, which is still advancing towards the sea. If the lava surrounds the mountain, to the north, it would cause even more damage as it would reach the municipality of Tazacorte– the residents of the area already live with anxiety.

The eruption of the La Palma volcano was at the center of King Felipe VI’s speech at the 2021 Princess of Asturias Awards gala. The monarch reminded everyone of the victims and people who have been left without their homes and have lost everything.

“I would like everyone to remember those who live there, who have suffered from the tremendous volcanic eruption and that they have seen their lives changed in such a dramatic way and with as much helplessness as sadness,” he said.

The helmet that the Spanish rider Fernando Alonso (Alpine) will use this weekend at the United States Grand Prix is ​​reminiscent of the island of La Palma and will be auctioned at the beginning of November for those affected by the eruption of the Cumbre Vieja volcano.

The back of the helmet bears the drawing of the volcano expelling lava, the shape of a heart, bananas in the yellow stripes and the name of the Canary Island at the bottom.