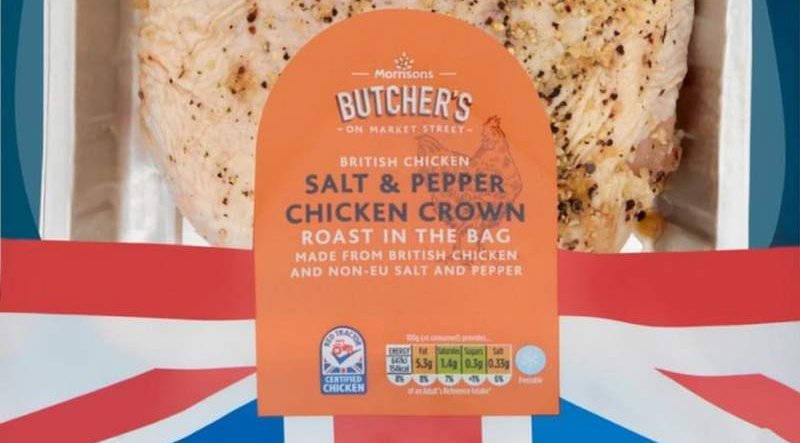 Supermarket Morrisons has caused anger as customers complain about its labelling of a chicken that contained “non-EU salt and pepper.”

Morrisons supermarket has released a statement after causing anger as customers complained about its labelling of a chicken that contained “non-EU salt and pepper.”

The supermarket’s salt-and-pepper chicken crown has a label featuring a Union Flag on it, stating it is “made from British Chicken” and contains “non-EU salt and pepper.”

Twitter users shared their anger, with one accusing the supermarket chain of “anti-EU hatred.”

In response, Morrisons said the wording was “an error for which we apologise.”

“We are changing the packaging immediately,” its tweet added.

A spokesman for the firm said: “It is adhering to packaging regulations rather than making any political point.”

They have said they will change the packaging and de-emphasise the mention of non-EU salt and pepper, however, packaging laws mean they will have to state it somewhere on the wrapping.

According to government guidance on food labelling, the term “non-EU” has to be used on meat packaging when the full country information is unavailable.

As of October next year, after post-Brexit rule changes, this will be replaced by “non-UK.”

One Twitter user pointed out the irony of Morrisons, which will soon be owned by a US company, displaying British credentials on its labels as the company recently approved a multi-billion pound takeover offer from US private equity group Clayton, Dubilier & Rice (CD&R).

Another Tweeted: “I’ve just had a look at my salt and pepper and it has no country of origin on it. It’s from Aldi…

“Does that mean it’s non-EU or not? Is it safe to put it on an English chicken? Asking for Morrisons…”

A third Tweeted: “In other words, they get their S&P from somewhere further away, creating more impact on the climate.”

Another questioned how useful this information was for shoppers: “Aside from anything else, I’d have thought most normal people want to know where foodstuff IS from, not where it isn’t.”

This comes in the midst of a debate in the food industry about company’s using patriotic images on packaging more and more with trade publication The Grocer claiming it as part of a post-Brexit “culture war.”