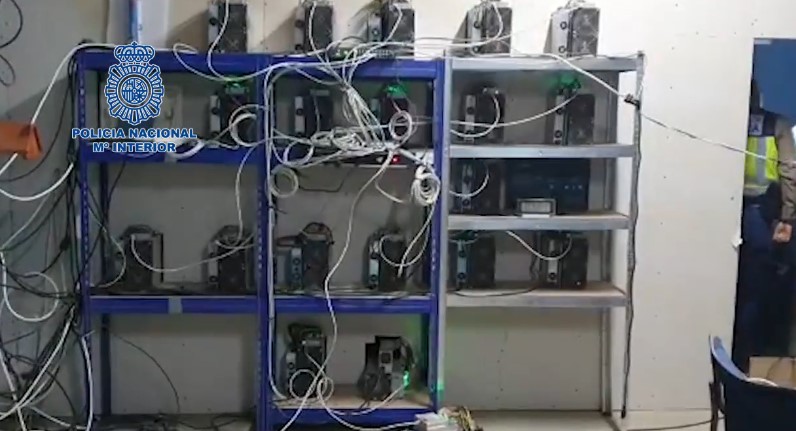 The National Police, in the framework of ‘Operation Troy’, has dismantled the first cryptocurrency mining farm to ever be discovered in the province of Sevilla. It was located in Santiponce, where the investigating officers seized 21 computers, with an estimated value of €50,000.
The facility, set up inside stables, was equipped with powerful cooling and ventilation systems, illegally connected to the electricity grid. Initially, the police had believed that an indoor marijuana plantation was being cultivated on the premises. Discovering the cryptocurrency farm was a complete accident.
After carrying out their first inquiries, the investigators soon realised that the cultivation of marijuana was not taking place in the facility. They soon became aware though that a cryptocurrency farm could be housed in there, something about which there are hardly any records in Spain.
Once the relevant permissions were granted, a search of the premises was carried out, which is when the officers found a fully equipped cryptocurrency mining operation going on.
21 ASIC computers were confiscated, being used exclusively for bitcoin mining. It was calculated that the operatives could be making a monthly profit of around €2,500.
RIG mining equipment was also found, which is also used for mining cryptocurrencies. This was believed to have an approximate value of €13,000, and could generate profits of €1,000 per month.
With the high temperatures that are generated by mining, they needed to use powerful cooling systems, with industrial fans designed to move the hot air to the outside.
Outside the premises, officers found the facility had an illegal connection to the electrical network, which would have been using a very high consumption. According to technicians from the electrical company, this could have been generating a monthly electricity fraud of €2,000.
The seized material is now being analysed by the investigating officers, to identify those responsible for these facilities. It is believed that these activities were in an early phase of operation, and the police intervention has dismantled the activity before it became profitable for the organisation, as reported by sevilla.abc.es.