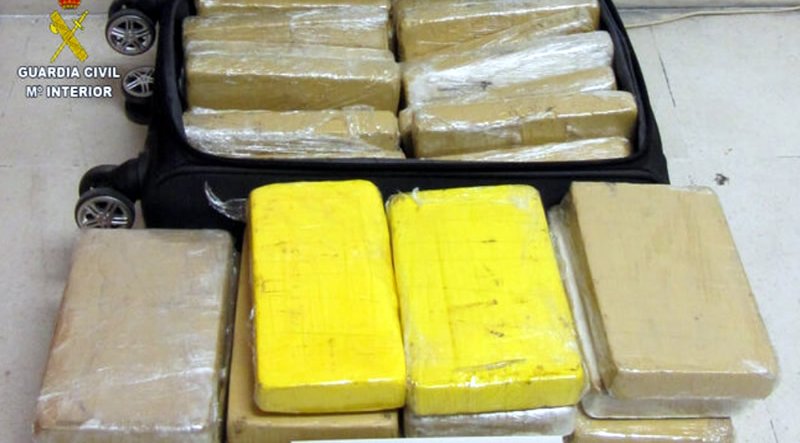 Brazil sentences army sergeant to 14 and a half years for smuggling cocaine into Spain. image: guardia civil

A military court in Brazil, on Tuesday, February 15, sentenced Sergeant Manoel Silva Rodrigues to 14 years and six months in prison. In June 2019, Rodrigues had been caught trying to smuggle 37 kilos of cocaine into Spain.

Rodrigues had travelled on an official plane that was part of the delegation of Brazilian President Jair Bolsonaro. He was arrested at Sevilla airport by the Spanish security forces, who found the cocaine in one of his suitcases during a technical search of a Brazilian Air Force plane.

In February 2020, Rodrigues was sentenced to six years in prison by the Spanish Justice, where he remains in prison until now. He must serve the full sentence, before being transferred to a Brazilian penitentiary, when the sentence handed down by the military court becomes effective.

During the trial in Spain, the sergeant confessed to his crime, admitting that he had tried to “take advantage of his military status”, and that the cocaine was due to be delivered to “a shopping centre” in Sevilla.

The investigation and police cooperation between Brazil and Spain in this case led to the discovery of a network of drug traffickers who used Brazilian military planes to send drugs to other countries.

In March 2021, within the framework of this investigation, the Brazilian authorities arrested three members of the Air Force, plus a woman accused of complicity with the sergeant detained in Spain.

Those arrested, who have not yet been tried, were a lieutenant colonel, and two non-commissioned officers from the Air Force, while the woman was identified as the wife of Sergeant Rodrigues.

At the time of the sergeant’s arrest in Spain, Bolsonaro, a captain in the Army reserve, was outraged, and demanded “severe punishment”. He guaranteed that his government would not “tolerate this lack of respect” for the country.

He also acknowledged that the incident “damaged the image of Brazil, and muddied the name of the institutions”, although he stressed that these types of events are not exclusive to his country, but rather “occur all over the world”, as reported by diariodesevilla.es.