UK bans ad with model in bikini for objectifying women 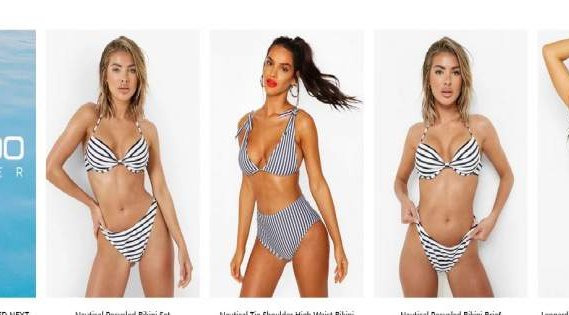 Online fashion retailer Boohoo (BOOH.L) has an ad in the UK banned for showing a model wearing thong-style bikini bottoms by Britain’s advertising regulator for objectifying and sexualising women.
The Advertising Standards Authority (ASA) said the ad was irresponsible and likely to cause serious offence, noting that neither the partial nudity nor the bikini bottoms were relevant to the product and that the images did not show the product as it would usually be worn.
A statement issued by the watchdog says a series of poses in the listing were “sexually suggestive”, and another emphasised the model’s exposed skin rather than the product.
London-listed Boohoo, which has sought to improve its reputation after negative publicity over supply chain failings, told ASA that the images were part of its swimwear category and this was why the model wearing the T-shirt was in a bikini.
A spokesperson for Boohoo, which also owns the PrettyLittleThing, Nasty Gal and the MissPap brands, told Reuters: “We are disappointed by the findings of this ruling…Our marketing reflects the vibrant and confident culture of our brand and is designed to empower, not to intentionally cause offence.
“We removed the associated images from our website when we received details of the complaint from the ASA.”
A statement by ASA said: “We told Boohoo.com UK Ltd to ensure that future ads were prepared with a sense of responsibility to consumers and to society and that they did not cause serious or widespread offence or harm by objectifying women.”
The Manchester based company has come under fire for its ads before, this being the second time in three years with the previous case in 2019 being ruled by ASA that a reference to “send nudes” on Boohoo’s marketing e-mail was socially irresponsible and breached its code.
What is deemed acceptable is changing as the face of Britain changes. A new breed of social media influencers using apps like Instagram and Tik Tok to promote products has been instrumental in raising concern about body image issues among young people who consume heavily-edited virtual versions of their idols.
The decision banning a bikini clad model for objectifying women will worry some, with their advertising not that dissimilar to the Boohoo ad banned.