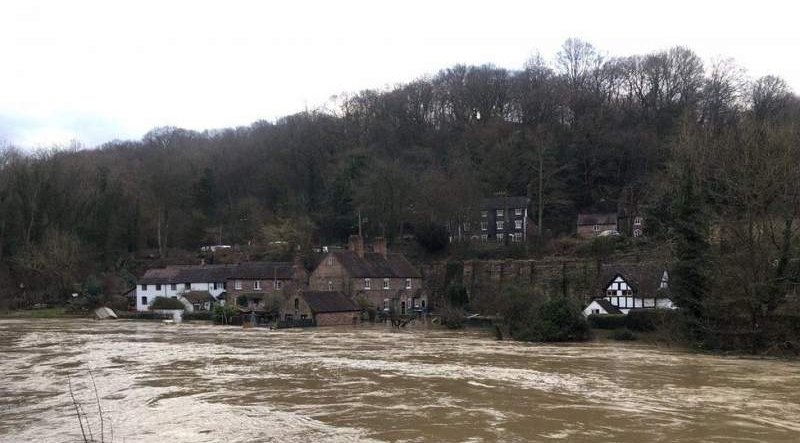 The Environment Agency has issued more warnings for flooding in the north of England parts of the West Midlands, saying that more rain is likely to hamper recovery efforts.
With three storms having passed over the UK within a week thousands have been evacuated, millions left with power and at least three people have died.
Currently around 90 flood warnings remain in place including two “severe warnings” for the River Severn, possibly endangering life, with some homes already evacuated as the water levels rise.

Properties have been evacuated and people rescued in Ironbridge, Shropshire with severe flooding expected as the Severn flood barriers are expected to be breached today. Elsewhere there is flooding in Bewdley, Worcestershire, and large parts of Shrewsbury town centre are under water.
In the Shrewsbury area of the county, the River Severn appears to have peaked at 16.9ft (5.15m), 3.9 inches (10cm) short of the record levels set in 2000.
In the Melverley area, close to the banks of the River Vyrnwy fourteen people and four dogs have been rescued from flooding with rail services in the area cancelled and some roads impassable.
National Rail said water levels at Shrewsbury had subsided by late Tuesday morning and lines have reopened, but it warned customers major disruption is set to continue until the evening.
According to the Met Office some rain is expected in areas already affected by the flooding, and although not as heavy as what was experienced earlier this and least week, it will hamper recovery efforts.

A flood warning remains in place near Wyesham in Monmouthshire in Wales, with some roads in Powys still submerged so the extent of water damage in the local area remains unknown. The area is said to look like a disaster zone.

Four flood warnings have been issued for Scotland, in Strath Oykel, Callender, Strathglass and Churchill Barriers in Orkney.

Clean ups have begun across the country including in Matlock, Derbyshire, where the town’s high street was submerged, the third time it has been hit by devastating floods in three years.
Efforts to restore power continue with nearly 30,000 homes still without power as of Monday afternoon, including over 3,300 in the South West and 800 in the East of England.
Power has since been restored to all the homes in Northern Ireland but transport networks remain severely disrupted some trains, airports, ferries, roads and bridges closed due to wind and flooding.
National Rail said travellers should check before travelling on the railways on Tuesday ahead of a “small number of delays and alterations”.
Transport for Wales said there were no trains between Hereford and Shrewsbury on Tuesday because of flooding on the line.
More flooding is forecast as the waters make their way down the rivers and more rain falls, which will continue to hamper UK recovery efforts.