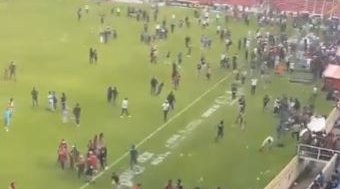 Football bloodbath: More than 20 people were injured during a football match in Mexico.

An on-pitch brawl broke out at a Queretaro v Atlas FC game on Saturday in Mexico. Initial reports according to local media in Mexico had suggested that 17 people had died.

According to the Coordination of Civil Protection of the State of Querétaro officials though 22 people were taken to hospital. Two of these people are said to be in critical condition.

The officials commented: “The rest are stable. It should be mentioned that all of those injured are male and at this moment it’s been confirmed that four were from the state of Jalisco.”

The bloodbath began when chaos broke out as Queretaro were losing the match. As reported by The Sun, at the 62nd minute the game had to be suspended. Reportedly metal bars had been used as weapons as fans rushed onto the pitch.

According to reports, families tried to make it to safety after security guards opened the gates onto the field. The teams escaped the violence and headed back to their locker rooms.

Taking to Twitter Mikel Arriola, President of Liga MX commented: “Unacceptable and unfortunate violence at the Corregidora stadium in Queretaro.

“Those responsible for the lack of security in the stadium will be punished in an exemplary manner. The safety of our players and fans is a priority!”

A full investigation is expected to take place into the shocking incident at the La Corregidora stadium.