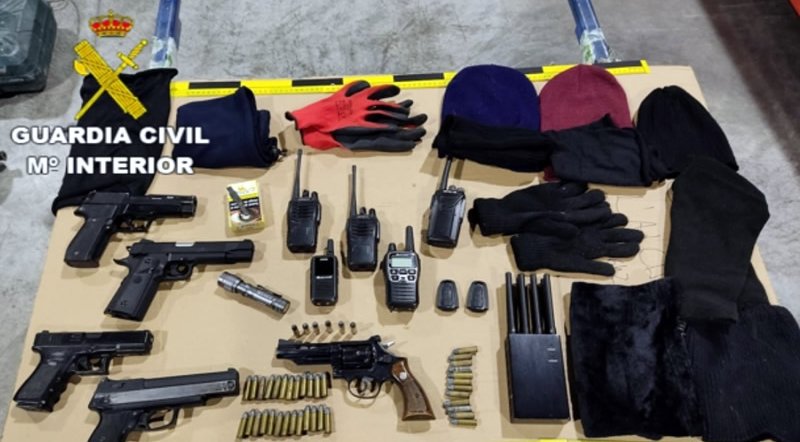 The Guardia Civil has dismantled a gang suspected of committing 61 robberies in the provinces of Valencia and Castellon. Officers from the Betera and Lliria barracks took part in ‘Operation Matalaf’, which ended with the arrest of seven people.

Those detained were five men and two women, all of Spanish nationality, between the ages of 27 and 58, accused of the crimes of belonging to a criminal organsation, money laundering, falsification of public documents, and against road safety.

They had carried out robberies with force, as well as other crimes of damage, robbery with violence, intimidation, and theft of vehicles, often using the ‘ramraiding’ technique during robberies.

This operation began in mid-August, when the police learned of several robberies in companies in the Naquera and Lliria industrial estates. Investigators soon verified a criminal gang based in Valencia.

During their robberies, they stole a multitude of high-value products, especially telephones, perfumes, and electrical appliances, for their subsequent illicit distribution in the market. In addition, the detainees stole from farms and pet stores.

As reported by lasprovincias.es, the organisation stole high-end vehicles to subsequently carry out their robberies, mainly on the weekends. To blend in with the surroundings, gang members would dress in work overalls, or work clothes.

Investigations led to the location of a country house in the municipality of Lliria, where the vehicles used by the organisation were kept. On February 15, officers carried out 12 searches in the municipalities of Burjassot, Benimamet, Alboraya, Valencia, Vilamarxant and Lliria. This saw five vehicles valued at €100,000 seized, along with €25,000 in cash, and surveillance material.

Various weapons were also confiscated, as well as seven stolen vehicles and an ambulance, with a value of €100,000 euros. The gang is thought to have carried out all their robberies in a period of seven months. The confiscated items allegedly have a total value of more than €800,000.

The proceedings of the operation were passed to the disposition of the Court of First Instance and Instruction No2 of Lliria, with a judge already sending three of the arrested to prison.