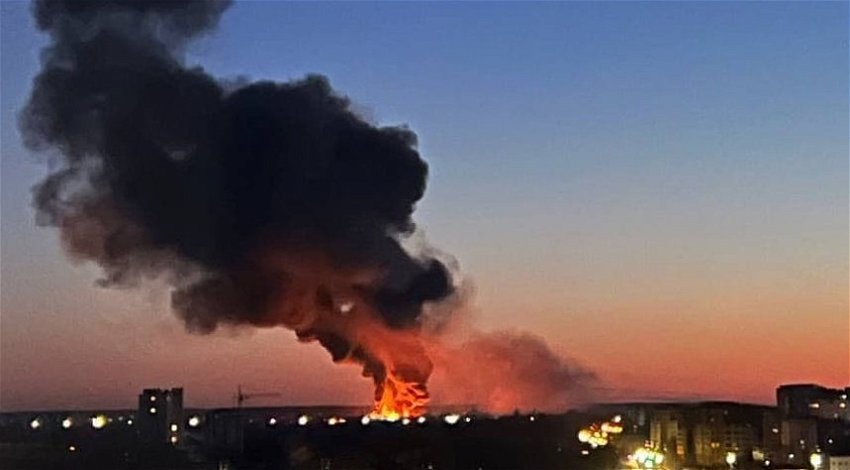 BREAKING: Russian forces blow up a military airbase in Lutsk.

SHOCKING footage shows huge explosions rocking the Ukrainian city of Lutsk in the early hours of Friday, March 11, with a military airbase reportedly blown up as part of the airstrikes. Many people online are accusing Russia of using thermobaric bombs in Ukraine, which they believe is the case in this latest attack.

Russian Defense Ministry spokesman Igor Konashenkov said on March 11 that Russian troops have launched a high-precision, long-range attack on two military airfields in the Ukrainian cities of Lutsk and Ivano-Frankivsk and both have been taken out of action, as per the Jerusalem Post.

Reports of airstrikes on the Lutsk military airbase circa 130km from Lviv in northwest Ukraine have been circulating on social media since March 11. Unverified video footage shows HUGE explosions and there have been reports of significant damage to the area around the blast as fire rage on.

According to local reports, several aircraft are secured at the base, while the missile attack is also believed to have hit the Lutsk aircraft repair plant “Motor”, said to be the only enterprise in Ukraine to repair RD-33 engines for the MiG-29.

Lutsk also has a major oil depot located near where the bombs dropped and a major fire has been reported at one of the facilities.

It is reportedly the first time that Lutsk, which is located only 90km from the Polish border, has come under Russian attack.

Video reportedly of a Russian strike on Lutsk. https://t.co/c3dXhFElme pic.twitter.com/VoUi96LGHM

A statement from public utility company Lutskteplo, which is based in Lutsk, said that: “Due to the turbulence in Lutsk, two boilers on Karbyshev and Volodymyrska Streets have been suspended for an hour. The boilers will resume operation after the situation is stabilised.”

Another video from Lutsk after Russian missiles hit the airport there. HUGE fireball. pic.twitter.com/1ypnIorxYl