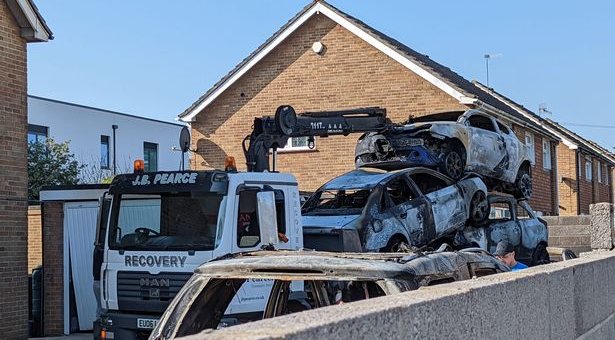 Police in Bristol, UK, have launched an investigation after being called to a fire at 1:30am on Sunday April where they found arsonists have set fire to more than 20 cars.

The incident which took place in and around Filton also included cars in the Rolls Royce jet engine car park, and in Bradley Stoke, Little Stoke and Stoke Gifford.

No one was injured and nor properties were damaged despite some of the vehicles fuel tanks exploding.

A statement by the Avon and Somerset Police said: “At this early stage the damage is making it difficult to identify vehicles in order to notify the owners,” the force said.

“We’d like to hear from anyone who finds their own vehicle has been damaged, as well as anyone with information or dashcam, CCTV or other footage which could help our enquiries.”

House to house inquiries are being made at the moment with CCTV footage being collected. The police have however asked for any witnesses or anyone who might have seen or heard something to contact them.

No one has claimed responsibility for the fires however some fingers have been pointed at environmental activists (the Tyre Extinguishers) who recently claimed to have deflated the tyres on a number of SUVs in Bristol.

It is unlikely that no one would have seen the arsonists in Bristol, or that someone would not have seen them set the 20 cars on fire. Police are confident as a result that they will trace the culprits quickly and will soon be able to announce that arrests have been made.