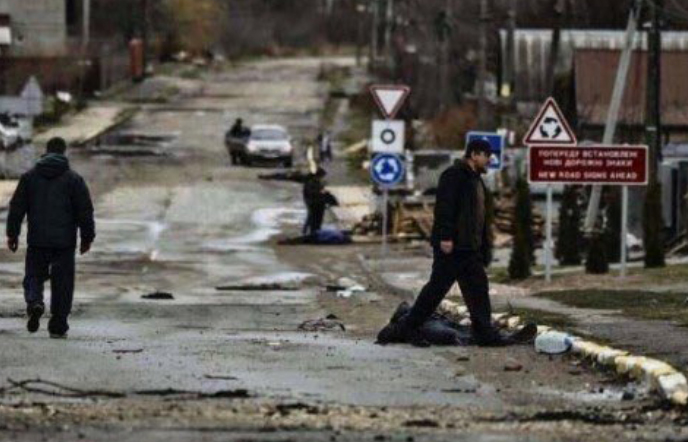 A scene of the devastation in Bucha. Credit: @DmytroKuleba, Twitter

The European Union has condemned “in the strongest possible terms” reported atrocities in Bucha and is preparing further sanctions against Russia “as a matter of urgency”.

Josep Borrell, the EU’s foreign policy chief, issued a statement on behalf of the bloc, saying: “The European Union condemns in the strongest possible terms the reported atrocities committed by the Russian armed forces in a number of occupied Ukrainian towns, that have now been liberated.

“Haunting images of large numbers of civilian deaths and casualties, as well as destruction of civilian infrastructures show the true face of the brutal war of aggression Russia is waging against Ukraine and its people.

“The massacres in the town of Bucha and other Ukrainian towns will be inscribed in the list of atrocities committed on European soil.”

He said Russian authorities are “responsible for these atrocities, committed while they had effective control of the area”.

Germany’s defence minister said on Sunday that the European Union must discuss banning the import of Russian gas.

“There has to be a response. Such crimes must not remain unanswered,” the defence ministry quoted Christine Lambrecht as saying in an interview with the public broadcaster ARD.

Berlin has so far resisted calls to impose severe sanctions on energy imports from Russia but in common with France, in particular, it is now seeking stronger measures against Putin.

Michelle Bachelet, the UN high commissioner for human rights, has issued a statement on the alleged war crimes committed in Bucha.

“I am horrified by the images of civilians lying dead on the streets and in improvised graves in the town of Bucha in Ukraine,” she said.

Under the Geneva Convention it is considered a war crime if civilians are deliberately attacked.