Man mauled to death by shark and another body missing 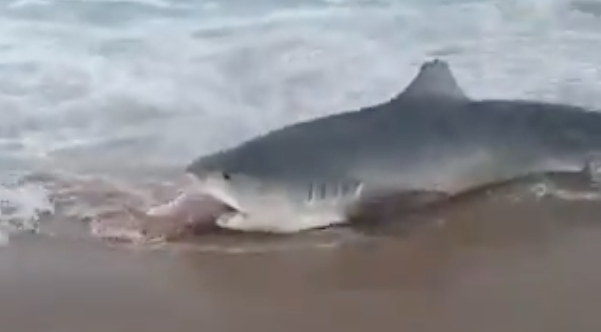 Man mauled to death by shark and another body missing. Image: YouTube

A man was mauled to death by a shark in South Africa while another body remains missing.

THE body of a man mauled to death by a shark washed up off the coast of South Africa while another person’s body remains missing. The body found was missing portions of its arm and chest.

The attack is believed to have occurred on Friday, April 1, after the mutilated body was found washed up on La Lucia beach in Durban by a walker, as reported by the Sun.

Shawn Herbst, a Netcare 911 spokesperson, said the alarm was raised at around 4.30 pm (local time) on April 1.

“Although authorities will determine the exact cause of death, it is believed the deceased had been predated on following the drowning,” he said.

“Reports indicate that while walking on the beach, a man came across the decomposing body of an adult male face down between washed-up flotsam.

“A second body was also found in the shore break, but it had been washed back out to sea by the strong surf before lifeguards arrived on scene.

“When medics turned the body over for assessment, it was found that a portion of the right upper arm and right chest area were missing, with multiple shark bite marks clearly visible.”

Police spokesperson Lieutenant-Colonel Nqobile Gwala said the body was handed over to the Durban North SAPS for further investigation.

“It is alleged that on April 1, 2022, at 4:40pm, a decomposed body of a male was found washed out by sea at Glen Ashley Beach. The circumstances surrounding the incident are being investigated,” Gwala said, as reported by South African news outlet IOL.

Last month, an Italian tourist was killed by a shark off the coastline of the Colombian island of San Andres.

On March 18, 56-year-old Italian snorkeler Antonio Straccialini is believed to have been bitten in leg by an 8ft shark before bleeding to death.