WATCH: Flaming car crashes into the Russian Embassy in Bucharest 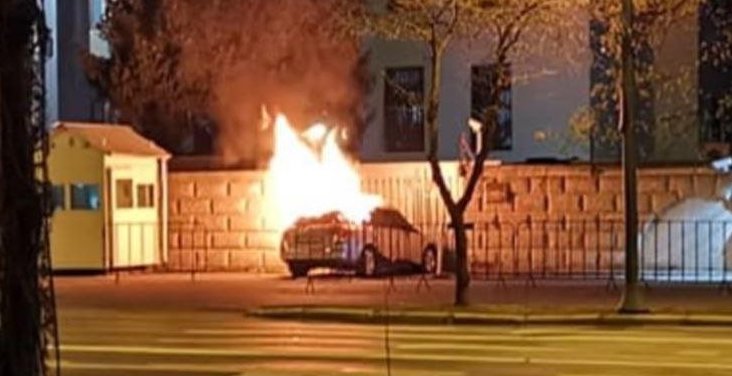 A flaming car crashes into the Russian Embassy in Bucharest.

A FLAMING car crashed into the Russian Embassy in Bucharest, Romania on Wednesday, April 6, as police were shown panicking to put out the flames.

Videos being shared on social media show the moments a car covered in flames rammed into the gates outside the embassy as police stand by unable to prevent the incident.

According to a police statement, the car crashed into a fence surrounding the Russian Embassy in the Romanian capital, Bucharest, bursting into flames and killing the driver.

The vehicle hit the fence at around 6 am on April 6 but did not enter the embassy compound. Firefighters were able to put the fire out, but the driver died at the scene, authorities said in a statement.

“Investigations have been taken over by the Prosecutor’s Office attached to the Bucharest Tribunal and the Homicide Service of the Capital Police in order to establish the causes and conditions in which this event took place,” the statement concluded.

The man has been identified as Bogdan Drăghici, according to Romanian 24-hour news channel Digi 24.

Drăghici, who is believed to be the leader of the father’s rights group TATA (Anti-Discrimination Alliance of All Dads), was sentenced to 15 years and four months in jail for sexually assaulting and raping his daughter, a minor, as reported by the Daily Mail.

A statement from the embassy revealed that no one at the diplomatic building was injured.

Adding: “We must state with regret that whatever the motives of the driver, there is no doubt that he committed this act under the influence of an explosion of anti-Russian hysteria in connection with a staged provocation in the city of Bucha.”

Last month, a man was arrested by Gardai in Dublin after he reversed his lorry through the gates of the Russian embassy on Orwell Road.

On March 7, at around 1.30 pm, the man smashed through the gates before coming to a standstill at the entrance to the building – as a crowd of onlookers cheered him on.