Outrage as pro-Russian motorcades planned for German cities this weekend 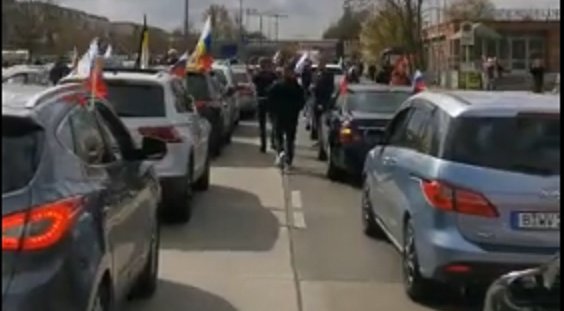 Authorities in Germany are bracing themselves with pro-Russian motorcades planned in at least six different cities this weekend, sparking outrage.

The motorcades, which have been arranged via the messaging app Telegram, are said to be taking place in Hanover, Osnabrück, Stuttgart and Lörrach as well as in the Allgäu between Kempten and Kaufbeuren. In Frankfurt, pro-Russian demonstrators are planning a march.

The Ministry of the Interior in Hesse, recognising the righto demonstrate, informed the editorial network Germany (RND) that they were planning “with a strong approach and a strong presence”.

The domestic spokesperson for Greens parliamentary group, Irene Mihalic, herself a police officer herself told RND: “It is almost unbearable when the aggressors are publicly celebrated in view of the Russian war of aggression and against the background of the mass murders in places like Bucha.”

She added that the police will pay very close attention to those who exceed the acceptable limit, citing the example of condoning war crimes.

Lower Saxony’s Interior Minister Boris Pistorius (SPD) issued a corresponding decree to the police authorities . In it he called on the police to take action against pro-Russian war propaganda at the demonstrations.

He said: “We will not accept if meetings are converted into Russian nationalist demonstrations of power and march through our streets as a kind of victory celebration.

“The right to demonstrate should not be abused for Russian war propaganda on German streets.”

Lower Saxony is one of the states where the Z symbol is banned in public, however enforcing the ban is very difficult. It is difficult to prove that it is not the letter “Z” that is meant, but the symbol. “It seems important to me to check carefully whether war crimes are condoned, which can be done with the Z symbol in a certain context.”

The SPD demanded that the framework for the pro-Russian demonstrations be precisely defined and that they be subject to conditions with a spokesperson saying: The location and the scope can be specified,”

According to Jörg Ennuschat, Professor of Public Law at the University of Bochum, the authorities cannot ban the motorcades. “A demonstration can only be banned if legal norms, especially criminal laws, are violated, our free society must also endure a pro-Russian motorcade.”

Berlin Germany
Demonstrations through cars flying the Russian flag in support of Russia and a protest against the economic policy of their country pic.twitter.com/sy6r0rnoEC

According to the ministry some demonstrations have already been held that have been peaceful, however with more and bigger pro-Russian motorcades planned for German cities this weekend that situation could change.