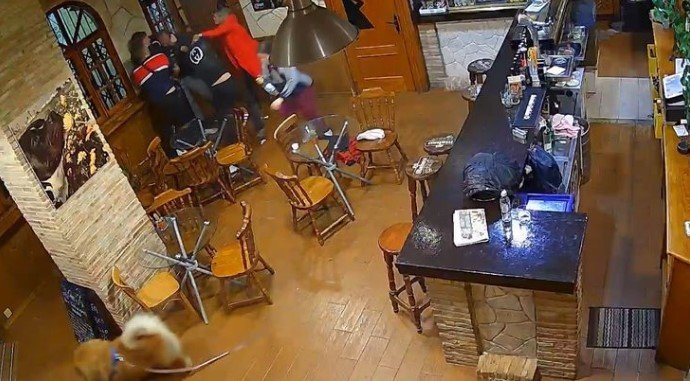 The Guardia Civil is investigating an incident that occurred in the Alicante province of Torrevieja last Sunday, April 10. It is alleged that two Russians, along with a third unidentified person, assaulted a man of Ukrainian nationality in a bar in the municipality.

Security camera footage showed three men entering the Tentaciones bar in Torrevieja at around 11:30pm. When they ordered drinks they were told by the owner that the bar was about to close. When the barman also repeated they were closing, the men allegedly asked where he was from. He responded, “I’m Ukrainian. Glory Ukraine”.

These words prompted the customers to launch an assault on the 43-year-old man, reportedly insulting him as they punched and kicked him, even while on the floor, almost semi-conscious. A medical report apparently lists a broken nose and bruises as part of his injuries.

It was Wednesday 13 before the man was well enough to go to the Guardia Civil post to denounce the assailants for their assault. A subsequent investigation has already identified two brothers of Russian origin, reportedly known in the area for previous episodes, both with a criminal record.

Several Ukrainian nationals turned up at the Guardia Civil barracks to show solidarity with their neighbour, who has lived in the town for 23 years. members of the ‘Ukrainians Heart to Heart’ association of Torrevieja described the incident as “barbaric”, claiming, ” by a miracle, they didn’t kill him”.

They have since offered to provide legal advice and psychological support to the victim, even hiring a law firm, experts in criminal matters, to handle the case of a possible hate crime.

There is concern and restlessness among the Ukrainian community in the region, with one resident commenting, “We were afraid that something like this could happen, and that the spark would fly as a result of the armed conflict”, as reported by laopiniondemurcia.es.